Charlton Orchards at Farmers Market Saturday in spite of fire 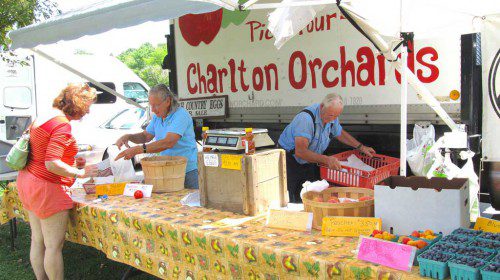 CHARLTON — Residents of Wakefield are saddened to learn that one of the staples at the town’s Farmers Market — vendor Charlton Orchards — suffered a major fire in its winery this past Sunday night.

The cause of the fire has been ruled an arson and a $5,000 reward has been offered for information leading to the arrest and conviction of the arsonist, according to the State Fire Marshal’s office.

Nathan Benjamin, son of the owner and named for his father, called the fire “an evil act.”

In spite of the family’s misfortune, they will be at Farmers Market this Saturday, Aug. 8.

“We lost our winery but didn’t lose the farm,” he said. “We have everything that would go on a table except the wine.”

Charlton Orchards, located near Worcester, will not be at the Aug. 15 market, however, because family members have been asked to attend a closed door hearing with Charlton’s Chief of Police, the town’s Fire Chief and other officials and State Police. Benjamin said leads are coming in and each one is being followed up. State Police are already “interviewing people,” said Benjamin.

Benjamin added that he has been “up for three days straight without any sleep” after losing hundreds of thousands of dollars in the fire. The building where the wine was stored was 4,200 square feet, and 4,400 gallons of wine, hard cider and spirits were lost, along with all packaging for farm products.

According to a news report, the fire started in a tree next to the building and spread from there.

Apparently, the family was getting ready for bed when Benjamin’s daughter looked out the window and saw a glow up the hill at the farm stand and winery behind their home.

In her Farmers Market column published on Fridays when the market runs during the summer and early fall, Wendy Dennis has written that Charlton Orchards would be on hand to sell their apples, fresh cider, along with assorted produce, honey and pasture-raised beef and eggs.

“Be sure to come and stock up!” Dennis has written.

The winery was said to be under-insured and there was no way for Benjamin to afford equipment replacement or to make up the huge loss.

The Benjamin family has a GoFundMe account. See the How to Help Charlton Orchards link in the top menu at wakefieldfarmersmarket.org.