Was an assistant coach last winter with the Warriors 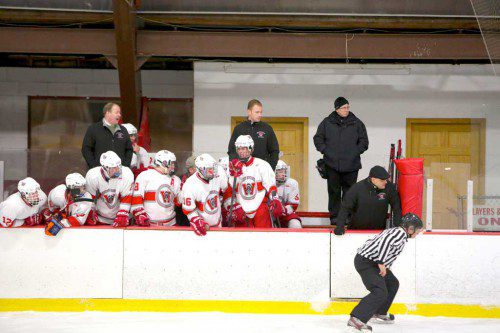 WAKEFIELD — Chris Gianatassio was named an assistant coach for the Wakefield Memorial High boys’ hockey team last year. He didn’t have to wait too long to be name the program’s head coach.

Gianatassio was appointed to the position in late July as he takes over for John Pellerin who coached the team for a year but is not returning.

Gianatassio, who is a 2004 graduate of Everett High, has a solid hockey background as a player and as a coach.

“I have only met and talked with him since I began on July 20. But what most people have told me is that he really cares about the program and he has already been talking to me about December,” said Kent. “He has been working hard with the youth hockey program. He strikes me as someone that really cares. He wants to lift the program to the next level.”

Gianatassio naturally is thrilled with becoming the head coach of the Warriors.

“I’m honored. Wakefield is a wonderful sports town,” said Gianatassio. “My goal is to return the program to the success it had in the past.”

Gianatassio, a Health and Life Skills teacher at WMHS, played for the Crimson Tide during his high school career. From there he went to the University of Southern Maine and played hockey for a year. After that, he attended Framingham State College where he played the rest of his collegiate career.

He returned to his alma mater, Everett High, after college and was an assistant coach there for the hockey team for two years. Gianatassio them moved to coach in the ranks of the Middlesex League as an assistant at Lexington High School and spent four years coaching the Minutemen.

Gianatassio then came to Wakefield a year ago as the head assistant coach and even filled in as the head coach for a game after the death of Pellerin’s father forced the former head coach to miss the season opener. Ironically the opener was against Lexington.

However the newly named head coach’s had head coaching experience prior to that as he coached for five years at the Bay State Games.

Gianatassio is currently a teacher at WMHS. But before he came to Wakefield he taught in Everett for six years. In addition to coaching hockey for the Crimson Tide, he also coached golf and baseball as well.

“We’re starting with a clean slate. It is now our job to teach the players,” said Gianatassio. “The players have the potential to go a long way. We also have a whole new coaching staff, too. They are younger guys who all played at the college level.”

“I also think working with the youth hockey program will be a big benefit to the high school program,” said Gianatassio. “We’re starting with a clean slate. We have a new system and I have my philosophy that I will be teaching.”

Most if not all of the Warrior hockey players took part in a summer league. In the fall since many play other sports, they will be working out in the weight room. There also will be captains practices as well. Gianatassio said that he has excellent leadership with the team’s captains and they have been terrific so far.

“There is a lot of excitement,” said Gianatassio. “I can’t wait for the season to start.”