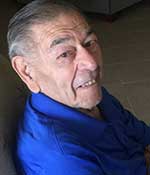 WAKEFIELD — Christopher Mirasolo Sr., 91 years young,  of Wakefield passed away peacefully after a courageous fight with Alzheimers Disease, in his home surrounded by his family and two granddogs, Huey and Captain, on Saturday, March 21, 2020.

Chris was born on February 3, 1929 to the late Joseph and Elizabeth Mirasolo. Raised in East Boston, Chris met and married his wife of 60 years, Constance (Masse), and the two raised three children in Revere.

Chris was in the clothing industry for several years before moving to Wakefield in the 1980’s, where he was a welcome addition to Wally’s Cleaners on Princess St.

Chris will be remembered for his sense of humor and his willingness to do anything for those he loved. The profound effect Chris had on those listed above is only matched by the love they had for him in return.

Due to the current global pandemic and in order to preserve the health of his family and friends, a memorial service and proper sendoff will be held in the coming months. Details to follow.