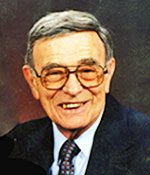 Clayton was born in Melrose on Aug. 17, 1922, son of the late Clayton B., and Gladys (Mollins) Conn. Raised in Melrose, Clayton graduated from Melrose High School with the Class of 1941. He went on to receive his undergraduate degree from the University of New Hampshire, and a master’s degree in English from Tufts University and CAGS from the University of London. An Army Medic during World War II, he was proud to have cared for his fellow countrymen in overseas hospitals and Army infirmaries. While stationed in Europe, he fell in love with Jenny Bernasconi from Monaco. They married and settled in Stoneham to raise their two sons.

A true scholar with a passion for knowledge, Clayton became an English teacher at Melrose High School where he worked for 35 years. He dedicated himself to sharing his passion for learning and knowledge to his students. He made an impact in the classroom with his love for the English language, literature and poetry, as well as on the athletic fields as a well respected coach. Clayton coached football in the 1950s and was involved with establishing the first soccer team at MHS. For his contributions to the school’s athletic community, Clayton was inducted into the MHS Athletic Hall of Fame in 2013. He relished seeing former students and keeping in touch with his fellow classmates from the Class of 1941. He was instrumental in organizing many MHS reunions for much of his life and loved reconnecting during monthly luncheons with fellow MHS teachers.

Outside of his love for teaching, Clayton was a caring and supportive family man. He was a dedicated husband, father, grandfather and great-grandfather. He enjoyed family vacations during the summer for many years to Lanesville along the coast of Rockport. Into his 90s, Clayton was well known as a sympathetic caretaker for any family member or friend, often times providing a compassionate hand at their bedside.

Clayton lived a full life with a wide array of interests and passions. For several years, he found joy in breeding and raising border collies at home with wife Jenny and sons Clayton and Larry. He had appreciation for music, with a particular love for singing wistfully in French. Often times, at reunions or family gatherings, he orchestrated sing-a-longs of one of his favorite tunes like “Piano Man.” Always ready for a party or just happy hour, he loved socializing and seeing familiar faces at his local favorite, JJ Grimsby’s. Another main interest was his family’s ancestry. He travelled around the country several times and up into Canada in search of family members to complete a detailed family tree. His thirst for knowledge and long life exposed him to many changes in culture but he never backed down from learning something new.

After the loss of his beloved wife Jenny, Clayton found comfort in a familiar place through a longtime and mutual friendship from high school. He married a fellow 1941 MHS graduate, Betty Stantial, who had also lost her own spouse of many years. Clayton and Betty enjoyed 28 years together, traveling around the world to destinations far and wide. They visited nearly every continent and traveled extensively throughout Europe.

Independent and strong, Clayton was a good man, well liked teacher and a great family man. He was passionate about nearly everything he did and he lived a full 92 years of life. Clayton will be missed but lovingly remembered by all who had the pleasure of knowing him.

Clayton was the beloved husband of the late Elizabeth H. (Wright) “Betty” Stantial Conn, with whom he shared 28 years of marriage; and the late Antoinette M. (Bernasconi) “Jenny” Conn with whom he shared 39 years of marriage. He was the devoted father of Clayton H. “Ken” Conn and his wife Peggy of West Barnstable and Laurence Conn and his wife Dottie of Stoneham. He was the caring stepfather of Donald W. Stantial and his wife Sharlene of Melrose; Phillip T. Stantial of Jacksonville, Fla.; William D. Stantial and his wife Elizabeth of Beverly; Steven H. Stantial of Lewiston, Maine; Cindy S. D’Amato and her husband Vinny of Peabody and the late John E. Stantial. He was the loving grandfather of 15 grandchildren and 13 great-grandchildren. He is predeceased by grandson Timothy Conn. Also survived by several nieces and nephews.

Relatives and friends will gather in honor of Clayton’s life for a Memorial Service at the Centre Congregational Church, 5 Summer St., Lynnfield on Wednesday, July 15 at a time to be announced. Gifts in Clayton’s memory may be made to the Alzheimer’s Association, 480 Pleasant St., Watertown MA 02472 or to the Melrose High School Permanent Scholarship Fund, PO Box 760695, Melrose MA 02176. For directions or online tribute visit RobinsonFuneralHome.com.