Published in the December 2, 2016 edition 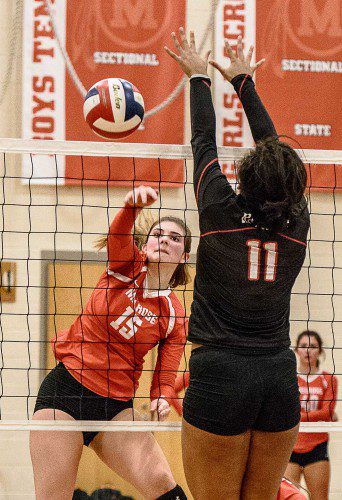 In her four years at Melrose High School, Crovo has amassed 832 total kills, which puts her only behind MHS Hall-of-Famer Hannah Brickley (894) in the record books. Thus, Crovo can consider herself one of the most talented players in MHS volleyball history.

“It’s been a phenomenal career for her,” says her longtime coach Scott Celli. “Her leadership is what really sets her apart. She’s been a three year captain for us, which is unprecedented and just speaks to her talent as player and leader. If you had to rank her among the program’s bests, she’s right up there.”

Crovo has played in 294 sets, virtually every game since her freshmen debut and only a brief injury this fall sidelined her from a “perfect attendance.” But the senior has made every set count and thanks to her contribution, Melrose has enjoyed an 83-16 win/loss record from 2013 to present, including Crovo’s season high total in 2015 with 259 nine kills. Her 77 kills  freshman year shows how prepared she was to become a Lady Raider.

Crovo, daughter of Stephen and Lisa and sister to Michael, 22, and Stephanie, 20, began her career by attending Celli’s volleyball summer camp in sixth grade and a Tufts University all-around camp before high school. Her varsity debut was a doozy: a win over Arlington Catholic.

“Watching the Melrose games as a kid made me fall in love with volleyball,” says Crovo. “Coming into the program as a freshman I didn’t know much about volleyball but I knew I was stepping into Melrose High’s best athletic program. The seniors on the team were so welcoming and eager to help. There is a family atmosphere that is truly special. It has helped me develop into the person I am today.”

Crovo was a standout MHS hoop player in her underclass years, which restricted her from club volleyball. But she showed no signs of wear on the volleyball court for it. After junior year, Crovo competed on Pumas 18 Jade, and continued summer training at Tufts. She credits both for helping her game progress to the level shown senior year.

Crovo is a triple threat; beside her skills in volleyball and basketball, she is also an all-star softball player, a ferocious #4 batter and shortstop.The senior hopes to continue her volleyball career in college. Her top two schools are Williams College and UMass Amherst. Williams would provide an opportunity to play volleyball, while both schools offer a chance for her to study biology.

And while Crovo still has two more sport seasons at MHS, it’s easy for her to reflect on a great high school volleyball career.

“It was an honor to be able to be a part of this program for four years,” she says. “The four teams I played with pushed me to work my hardest. This year our ‘team saying’ was ‘every day, every play.’ It represented what we wanted to achieve with coach Celli. To do this for four years is special and I wouldn’t trade it for anything.”