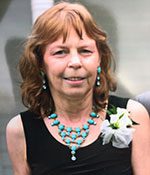 She was born in Danvers on April 22, 1960 and was the beloved daughter of Joyce M. (Murphy) Prunier and the late Arthur V. Prunier. She was raised in Danvers and was a graduate of Danvers High School and later from the North Shore Community College.

She had been a Wakefield resident since 1995 and had last been employed with Connolly Consulting of Atlanta, Ga. as a Forensic Accountant.

She was also a member of the Billerica Cat Care Coalition.

Her funeral will be held from the McDonald Funeral Home, 19 Yale Ave., Wakefield on Tuesday at 9 a.m. followed by her funeral Mass in St. Joseph Church, 173 Albion St., Wakefield at 10.

Visitation for relatives and friends will be held at the funeral home on Monday from 4 to 8 p.m.