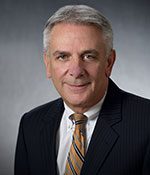 “I am excited to accept the position as president and CEO of The Savings Bank, and look forward to continuing the philanthropic legacy Brian McCoubrey has humbly fostered since his election as president in 1992,” Mr. DiBella said. “While we wish him well in his retirement, we will miss Brian’s foresight and his leadership, which have been a key part of The Savings Bank’s position as a leader in the industry and in the community.”

In reflecting on his career at The Savings Bank, most notably on his relationship with his successor, Mr. McCoubrey spoke about their friendship and the professional respect the two have shared over their three decades together.

“In the nearly 30 years we worked closely together on many projects and issues, we rarely argued, and when we did we ended up with something we thought was pretty good,” he said. “Many, many times we hammered stuff out together while sitting at a table, driving around or over the phone on weekends. Unfortunately, corporations have ‘titles.’ Bob and I have always been partners. Absolute equals. At the core, friends. I wish Bob great success as he carries on. More than anything else I will miss his company and our conversations.”

President DiBella joined The Savings Bank as accounting manager in 1987. He was promoted to assistant vice president, controller in 1989; treasurer in 1990; senior vice president, treasurer in 1993; chief operating officer in 1996; and executive vice president and chief operating officer in 1998; before being elected president and CEO of Wakefield Bancorp, MHC in April 2016. He has served in key leadership positions in the Bank’s subsidiaries and charitable foundations, including president & CEO of First Financial Trust, N.A.; TSB Securities Group; TSB Insurance Services, Inc.; TSB Charitable Foundation; and the Donald E. Garrant Foundation, Inc.