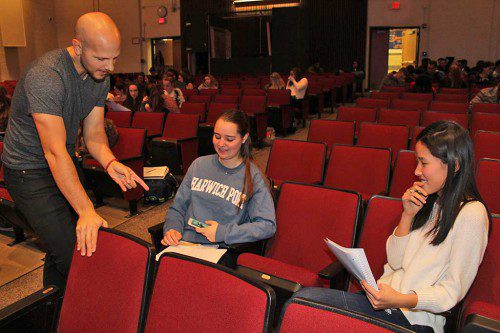 High school photography and design teacher Liz Hayden brought Wright to the high school after she received a grant from the Lynnfield Educational Trust (L.E.T.).

“I was a high school art teacher in Peabody and worked with Liz for eight years,” said Wright during an interview with the Villager. “We are good friends and have kept in touch. My family lives in Beverly and Lexington, so I always come home for the holidays. It worked out perfectly.”

Over the course of the four-hour workshop, Wright gave an overview of his journey from an aspiring artist growing up in Yarmouth, Maine to working for Disney Animation Studios.

After working as an art teacher and in other fields, Wright decided to go into animation several years ago.

“I decided I wanted to work in animation and started taking online classes that were specialized in animation,” said Wright.

Wright worked as a freelance illustrator in San Francisco before moving to Los Angeles.

“Elena of Avalor” is a computer-animated television series that debuted on the Disney Channel last July. The series, which is about a Latina princess and her family, was renewed for a second season last August.

“For the past three years, I was in the process of applying, networking and getting to know people who work in the industry,” said Wright. “(Disney) eventually had an opening and that is how it came to be.”

During the workshop, Wright gave aspiring artists a number of different drawing tips. He had students model and do different poses on stage, which in turn students had to draw.

“They are transforming (their classmates) into either superheroes or villains, and are trying to exaggerate that to make it dramatic and exciting,” said Wright. “It’s a chance for the students to design their own character and learn about what goes into designing characters for animation.”

Hayden said the workshop was an incredibly valuable experience for students.

“We know every kid is not going to become a professional artist, but it’s really inspiring for them to hear about the different life experiences he has had along the way,” said Johnson. “He studied abroad in Uganda during college and worked in Mexico for four months. He told the students how architecture and different cultures have inspired some of his animation in ‘Elena of Avalor.’”

Wright noted his life experiences have helped him grow as an artist. He said sharing those experiences is incredibly beneficial to students.

“A lot of creative people have had tons of different experiences,” added Hayden. “It helps inform who they are.”

“I think the number one thing is to work on your craft,” said Wright. “You have to spend thousands of hours to gain mastery and it’s really important to put the time in. Ultimately, you have to have the skill level to do it. You also need to be a good person to work with. You have to communicate clearly and get a long with other people.”

Hayden and Johnson both thanked the L.E.T. for funding Wright’s workshop and bringing his love of art to LHS.

“We are grateful to the L.E.T. for providing the grant and giving our students this opportunity,” said Hayden.