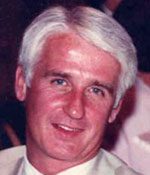 PEABODY—Donald P. McCormack, 74, beloved husband of Nancy (Gallagher) McCormack, died peacefully on Tuesday December 30, 2014 at the Kaplan Family Hospice House in Danvers, while in the comforting presence of his family.

Born in Lynn, he was the son of the late William and Elizabeth (Haggerty) McCormack. He grew up in Nahant, and graduated from St. Mary’s High School in Lynn. He then studied at Boston College, Class of 1963 for a bachelor degree in Business Administration. Later he achieved a Master Degree in Business Administration from the University of Massachusetts.

Mr. McCormack was the Vice President of Finance for 33 years with the Leavitt Corporation which owns Teddy Peanut Butter. He retired nine years ago.
Don was a member of the Knights of Columbus in Nahant, enjoyed skiing especially in North Conway area, and enjoyed cars. He was most passionate about his family, supporting and especially with his cherished grandchildren who called him “Pa.”

His funeral service was held on Saturday January 3, 2015  from the Conway, Cahill-Brodeur Funeral Home, 82 Lynn St., Peabody, followed by a funeral Mass  in St. Adelaide’s Church, Peabody.  Burial was in Puritan Lawn Memorial Park, Peabody. Memorial donations may be made to either St. Adelaide’s Church or to a charity of one’s choice.