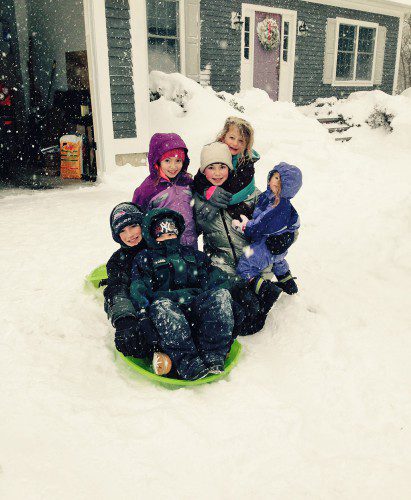 NORTH READING – The first 26 days of 2015 were almost snowless, a boon for those who hate to shovel and a bane for skiers. That all ended in a big way in the last 10 days as two memorable storms – the Blizzard of 2015 and a smaller but no less intense Nor’easter – roared into town leaving nearly four feet of snow behind for exhausted DPW crews and homeowners to deal with.

Snow began falling lightly late Monday afternoon, Jan. 26 and intensified heavily overnight, falling at a rate of three inches an hour. When folks woke up on Tuesday morning they were greeted with white out conditions in which travel was impossible (and strictly speaking illegal, since Governor Charlie Baker imposed a state wide travel ban that was entirely justified, at least in the eastern portion of the state). Schools were closed Tuesday and Wednesday and although travel was legal again on Wednesday, traffic was very light as many folks wisely chose to stay home for a second day and allow the town’s DPW cleanup crews to do their work. For a lot of people, the second day of clean up was necessary because when they went to dig out, they found waist–high snow drifts in many locations.

The first storm lasted over 40 hours. North Reading fought back with 74 pieces of equipment, including 47 private contractors.

According to DPW Director Dick Carnevale, the snow plow operators are the unsung heroes of the Blizzard of 2015.

“The guys do a good job. Give them all the credit. They know what they’re doing and they get it done every time we have a big storm,” said Carnevale. North Reading streets are consistently in better condition than most other towns, Carnevale agreed.

Forty eight hours after the blizzard the town had already moved on to what Carnevale called “all the residual stuff,” such as digging out the sidewalks and fire hydrants and removing piled up snow from important intersections. “That’s a tremendous amount of work, we’ll be doing this for a week, depending on the next storm,” he said.

The town caught a break when a forecasted storm last Friday night into Saturday dropped only a few inches. But the town wasn’t so lucky Sunday night, Feb. 1 into Monday, Feb. 3, when another storm dropped 17 or 18 inches on the region, with the worst of the snowfall coming during the morning rush hour. The snow started falling in the wee hours of Monday morning and when North Readingites awoke from their post-Super Bowl celebrations, they were greeted with four inches of white and fluffy snow already on the ground. The worst of the storm hit during the morning commute and continued throughout the day. Morning traffic was light as many commuters chose to either stay home or use public transportation.

North Reading Public Schools were closed on Monday, Feb. 2 and Tuesday, Feb. 3, (that’s four snow days in a week, after going all of December and the first 26 days of January without a snow day), and the School Committee cancelled its scheduled meeting for Monday night. Kindergarten registration was postponed until Feb. 5. Town Hall denizens are made of sterner stuff, however, and general government offices were open on Feb. 2 and 3. Trash and curbside recycling collection was delayed until Wednesday, Feb. 4. And to make things worse, forecasters were warning of another possible storm on Thursday night, Feb. 5.

In dealing with the blizzard, Carnevale said the DPW started operations early on Monday when they put a layer of road salt down. They plowed through to Wednesday morning. “The guys worked more than 48 hours straight. They punched in at 7 a.m. Monday and stayed continuously until 11 a.m. on Wednesday.”

“Because of the amount of snow, we couldn’t use snowblowers to clear sidewalks. We had three crews Wednesday night at three different locations, using front end loaders to remove snow. They worked from 10 p.m. to 6 a.m., they got about a mile and a half done. We typically do 12 miles of sidewalks and most of that are the approaches to schools.”

This includes portions of Main St. where land is owned by the town as well as sidewalks in the downtown and town center approaching the Batchelder and High Schools, Park St. West approaching the Little School and on Haverhill St. approaching the Hood School.

Carnevale said the DPW worked with the school department to clear the parking lot for the new high school. Front end loaders were brought in to move the snow out. Some spaces were lost because, since the area is still a construction site, “there are places you’d like to put the snow but because there are construction fences up, you can’t” he explained. The school’s upper parking lot area is “tight” to start with, he noted.

The snow itself was light and fluffy because it was accompanied by arctic temperatures. That made the cleanup efforts much easier. Carnevale said there were no major equipment issues other than windshield wiper replacements needed, sort of an occupational hazard.

“The town has a plan, everything is broken up into areas and zones in some zones we have the same guy who’s been doing it for 20 years, using the same equipment.” A number of mailboxes were accidentally hit by plows, not an unusual occurrence in a heavy storm, he noted.

Clean up after the Feb. 2 nor’easter followed the same game plan, with DPW crews, private contractors and local homeowners thoroughly exhausted and sick of snow by Tuesday morning.

In addition to the schools, town hall, the O’Leary Senior Center and the Flint Memorial Library were all closed on Tuesday, Jan. 27. If it had been necessary, town officials were prepared to open a shelter at the Batchelder School. Because the snow was light and fluffy, there were many fewer power outages than originally feared according to the forecasts. Curbside trash collection was postponed one day, until Wednesday.

Homeowners and business owners who have a fire hydrant close to their home or business are urged to take a few minutes and clear the snow away from it, if they have not already done so.

In addition to burying the Boston area in more than two feet of snow and lashing it with winds in excess of 70 mph., the storm punched a gaping hole in a seawall and swamped a vacant home in Marshfield and flipped a 110-ft. replica of a Revolutionary War ship in Newport, RI, snapping its mast and puncturing its hull. The entire island of Nantucket lost power. A 78 mph gust of wind was reported there, and a top gust of 72 mph was recorded on nearby Martha’s Vineyard.

In New York City, the storm was billed as a once in a century event, prompting the entire city to shut down. A driving ban was imposed and the subways were shut down, but the city only got 6 to 8 inches, nothing to write home about. But Long Island and New England were buried.

The gaffe prompted one National Weather Service forecaster to apologize. “You made a lot of tough decisions expecting us to get it right and we didn’t,” tweeted Gary Szatkowski of Mount Holly, N.J.