“A friend to students and learning” 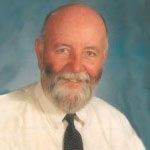 Diagnosed with Alzheimer’s in 2010, Bill was able to spend his final days at home under the loving care of his family. Bill was born in Weymouth in 1944 to John Norman and Margaret Connors Butler. He attended Archbishop Williams High School in Braintree, where he excelled academically and as the co–captain of the hockey team. Following high school, he attended Providence College, earning a full academic scholarship, and ultimately a bachelor’s degree in English Literature in 1961. Advanced degrees followed, with a Master’s of Education from Boston State College and a Ph.D. in Educational Administration from Purdue University. Bill dedicated his career to education, serving in school systems in Maine, New York and Massachusetts for over 35 years. He served as the Assistant Principal at Waterville High School in Waterville, Maine and later at Our Lady of Nazareth Academy in Wakefield. His first assignment as principal came at Granville Junior-Senior High School in Granville, N.Y.

The pinnacle of Bill’s career was certainly his time as the Principal of North Reading High School, (1981–1998), where he served 16 and a half years, earning the Outstanding Principal of the Year Award in 1993 from his peers at the Massachusetts Secondary School Administrators’ Association. He also dedicated personal time to the community of North Reading serving as a member of Saint Theresa Parish Pastoral Council and as an active member of the Citizens’ Scholarship Foundation. Throughout his life, Bill personified integrity, promoted service to the greater good and demonstrated ultimate dedication to his family and closest friends.

When the appropriate time comes, a place of honor will be found for that plaque in the new high school, according to Superintendent–elect Jon Bernard, also Principal of NRHS for the last 11 years.

Bill’s funeral was held in the McDonald Keohane Funeral Home, South Weymouth Saturday, Oct. 11, prior to a funeral Mass in St. Albert the Great Church, Weymouth. Burial was in Fairmount Cemetery, Weymouth.

In lieu of flowers, donations in memory of Bill may be made to the Alzheimer’s Association, 480 Pleasant St., Watertown MA 02472 or www.alz.org.