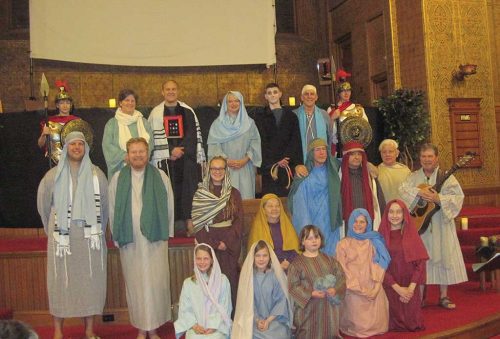 THE CAST of “A Passion for the Christ,” performed at the First Parish Congregational Church, gathered for a photo at the close of the Thursday, March 29 performance. A second and final performance is scheduled for tonight at 7 p.m. (Gail Lowe Photo)

WAKEFIELD — In preparation for Easter Sunday, this year to be celebrated on April 1, members of the First Parish Congregational Church presented “A Passion for the Christ” Thursday night, March 29.

A second and final performance is scheduled for tonight at 7 p.m.

The story of Jesus’ final days in Jerusalem are played out with a series of monologues delivered by Jesus’ disciples; Caiaphas, the high priest; an adulteress; Mary, mother of Jesus; Judas, betrayer of Jesus; Martha and Lazarus, friends of Jesus; Pontius Pilate and several other characters from the New Testament. The time and setting for the performance is Saturday night in Jerusalem. Jesus has been crucified and is lying in a tomb. The streets are quiet, and reactions to His death are mixed.

The program opens with a song titled “Come as You Are,” sung by Doug Jackson.