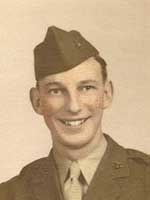 NORWELL — Edward J. O’Soro, 96, of Norwell, formerly of Reading and Wakefield, died at home on Sunday, December 25.
Mr. O’Soro is survived by his wife, Janet (Leather); four children and their spouses: Charles (Nancy) O’Soro of Reading, Laurie (Paul) Ricciardi of Norwell, Karen (Douglas) Storrs of Beaufort, SC, and John (Theresa) O’Soro of Saugus. He also leaves behind 10 grandchildren: Lisa, Michael and Jennifer; Valerie, Alex and Renée; Jamie and Andrew; Lucas and Jackson, and three great-grandchildren: Ainsley, Cameron and Austin.
Edward was proud of his Polish heritage and was an avid sports fan. He enjoyed his vegetable garden, photography, traveling, and playing golf. He also enjoyed woodworking and restoring furniture in his workshop. He loved playing cards and can be described as “a force to be reckoned with” when it came to Scrabble.
He was a 1939 graduate of Wakefield High School. Following the attack on Pearl Harbor, he enlisted in the U.S. Marine Corps, where he earned the rank of Sergeant. He was assigned to a mortar platoon in H Company, 2nd Battalion, 1st Marine Regiment (H-2-1) of the 1st Marine Division. He saw combat in the Pacific Theater during three major campaigns: Guadalcanal, New Britain (Cape Gloucester) and Peleliu.
The day after landing on Guadalcanal, his transport, the USS George F. Elliot, was struck by a damaged enemy plane and the majority of the regiment’s supplies, including personal items, were lost at sea. The small amount food, ammunition, clothing, and equipment that made it to shore on the day of the landing set the tone for the harsh living conditions that would follow throughout the campaign. On August 21, 1942 he was part of the Battle of Tenaru, the first major land offensive made by the Japanese. U.S. troops held their lines throughout the night, ultimately leading to an overwhelming victory – the first of the Pacific War. Air raids were a daily occurrence on Guadalcanal, often multiple times per day. In October, Eddie was reunited with many of his hometown buddies from Wakefield when the Army arrived at Guadalcanal to reinforce the 1st Marine Division. He often reflected about that time of the war, saying it was “just like a reunion on the other side of the world.”
Cape Gloucester was known for being one of the most brutal physical environments the Marines faced during the Pacific War. It rained endlessly, the mud was thick, and the jungle was so dense that visibility was limited to only several feet in some areas. In the early hours of the morning of December 30, 1943, during a particularly bad monsoon, his company encountered a banzai attack on their position. The Marines were successful in repulsing the attack, driving any remaining forces back into the jungle.
On the island of Peleliu, the 1st Marines ran into the heaviest opposition they had encountered in the war thus far. On day two of the fighting, an ammunition transport landed 400 meters off target, in the direction of enemy lines. Sgt. O’Soro, in charge of ammunition for H Company’s mortar crews, led his men up the beach to offload the ammunition. Shortly thereafter, an incoming enemy round exploded next to him, leaving him with shrapnel injuries and permanent loss of hearing in one ear. He remained fighting on the island for another week until, after heavy losses to the regiment, they were evacuated. He was awarded the Purple Heart for wounds suffered at Peleliu.
After returning to the States, he was assigned to recruiting duty in Manchester, NH. He was later selected to participate in a Victory Loan Bond Tour, traveling by train, stopping at all major cities and towns between Philadelphia and the state of Montana to support the war effort.
In 2005, he was contacted by the makers of HBO’s “The Pacific” and provided valuable information to the series, which featured the men of H Company.
After the war, Edward owned and operated various gas stations in Chelsea, Cambridge, and later a Sunoco station on Main Street in Reading. He and his wife Janet raised all four of their children in Reading. After retiring in 1986, they moved to Cornish, NH, then to Hampstead, NH, before moving to Norwell. They recently celebrated their 66th wedding anniversary.
In 2015, Honor Flight New England invited Edward to travel to Washington D.C. to visit the memorials of each military branch and reflect with other veterans. It was the trip of a lifetime for a veteran in the final years of his life.
A funeral service, with military honors, will be held Tuesday, January 10 at 11 a.m. at McDonald Funeral Home, 19 Yale Ave., Wakefield. Visitation for relatives and friends at the funeral home, prior to the service, from 10 to 11 a.m.