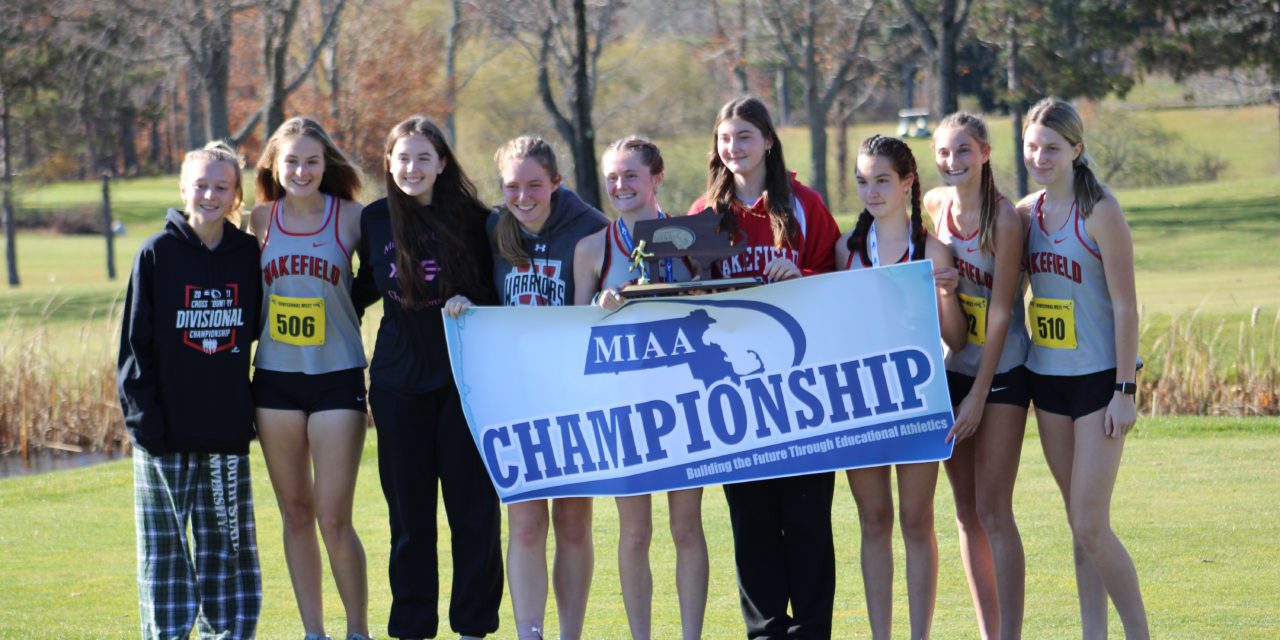 Following the lead of senior captain Sammy Seabury, whose incredible time of 18:52 on Saturday morning at Gardner Golf Course made her an individual state champion, the Warriors had a complete team effort, their top five finishing in the top 20 and all seven of their runners finishing in the top 50 out of the 112 competitors.

Wakefield’s pack running came into play with sophomore Charlotte O’Neil (18th, 21:28), senior Maggie Leone (19th, 21:31) and sophomore Alexa Yianacopolus (20th, 21:34) sticking together and pushing each other to all finish in the top 20.

The Warriors had an overall score of 51. Melrose was next at 69 followed by Longmeadow at 74 and Amherst-Pelham at 90.

“The girls were a powerhouse today,” said head coach Karen Barrett. “About halfway through, we were in fantastic position, with Seabury in first, Nett in the top 10 and Leone, O’Neil and Yianacopolus in the top 25. I said, ‘imagine if they held this the rest of the race, we could definitely achieve our goal.’

“As they came around the course loop the second time, with about 800 meters to go, Nett was in 8th place, having the best race of her career and on her way to earning a medal. O’Neil, Leone and Yianacopolus were in a pack running 18th, 19th and 20th, looking unbelievably strong and determined. Jellison and Brackett were our 6th and 7th runners, running well.

“As a coach, it was an amazing and thrilling moment watching this. I wasn’t sure where we would place as a team, but I was beyond ecstatic with the effort, guts and mental toughness these ladies put forth. They all gave it everything they had. I could not be prouder of them.” 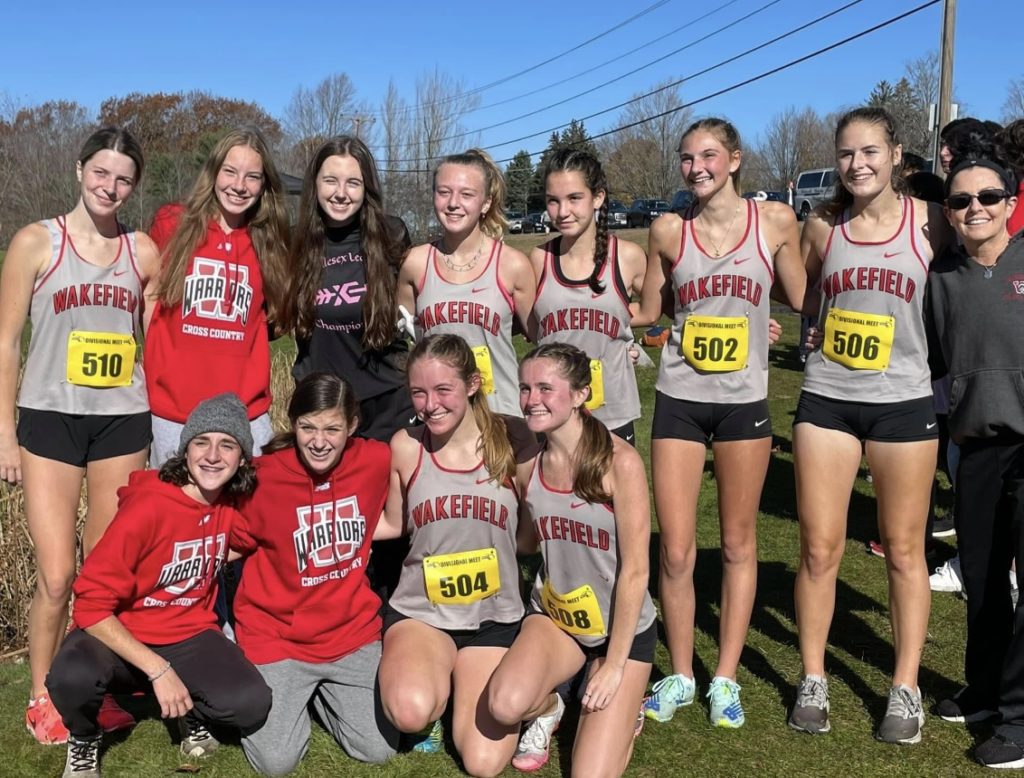 THE DIV. 2A State Champion Warriors will move on to the D2 All-State meet on Saturday in Wrentham where they will compete against the top seven teams from all three of Massachusetts’ D2 divisions. (Courtesy Photo)

The Warriors, who split the Middlesex League Freedom Division championship this year with Melrose and Wilmington, are state champions simply because they earned it.

In the hopes of finishing in the top seven as a team at states so they could qualify for the All-State Meet, Wakefield’s seven traveled to Gardner the weekend before the race for a trial run.

“It’s those extra steps in preparation that really make the difference,” said Barrett.

Maybe, as the Warriors got familiar with the terrain of the GGC, they even envisioned what it would be like to win it all.

“We had to wait about 15 minutes for the official results,” said Barrett. “When the team found out they won, it was almost like a dream – such a special moment. It was really awesome to see how happy they were holding the championship trophy.”

The Warriors will move on to the D2 All-State meet this Saturday, Nov. 20 at the Wrentham Developmental Center against the top seven from 2A, 2B and 2C.

The state championships were a newly aligned MIAA format this season. Rather than just Eastern Massachusetts teams, these divisions included Central and Western Mass. teams of similar enrollment numbers.

In this new format, Wakefield will always be remembered as the first champions.

Individually, the same can be said of Seabury, who has been the first competitor to cross the line in every single race she has run this season, including six regular season dual meets, the league championship meet and now three state meets as she also won the Twilight Invitational which included over 300 runners and the Bay State Invitational where she broke the school’s 5K record with an 18:49. 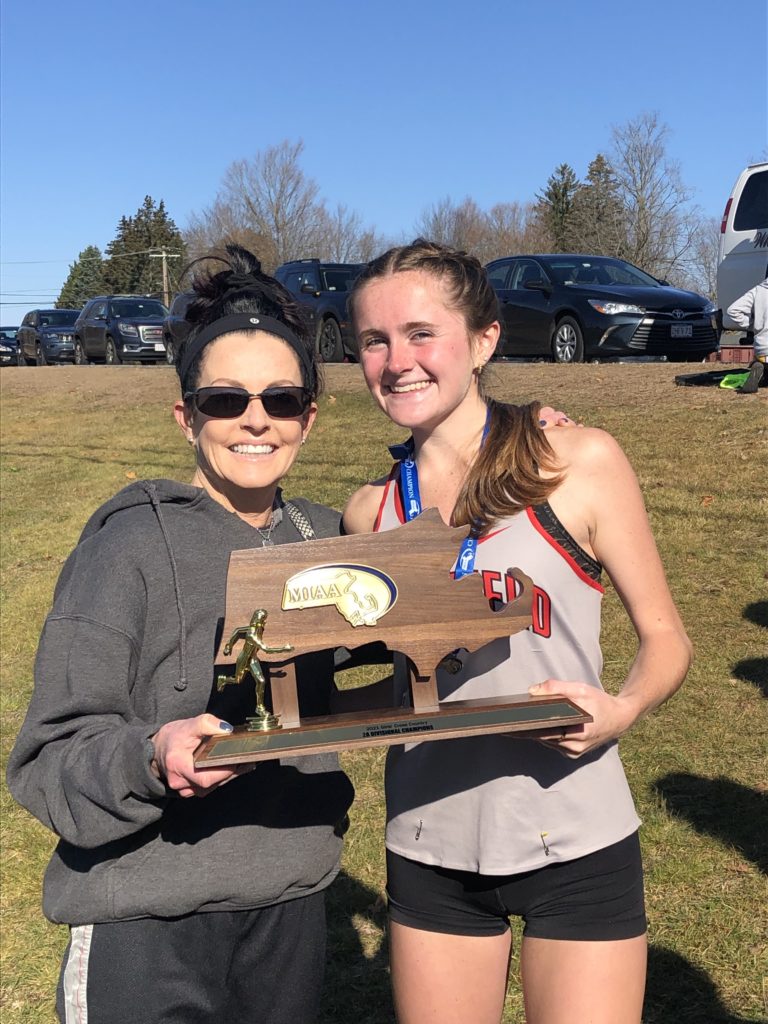 SAMMY SEABURY, pictured with head coach Karen Barrett and Wakefield’s state championship trophy, was the individual champion of the Div. 2A girls’ cross country state meet with a time of 18:52 on Saturday morning at Gardner Golf Course. (Courtesy Photo)

On Saturday in Gardner, Seabury finished 43 seconds ahead of the second-place winner, Caroline Collins of Nashoba (19:35).

“Sammy was the favorite going into the meet and she did not disappoint,” said Barrett. “She ran another fantastic race to remain undefeated. She is simply awesome. The accomplishments she has had in one season are beyond impressive. Her work ethic and leadership are second none. She is so deserving of all her success.”

Wakefield will look for even more medals on Saturday, as they race against the best in the state.

“We are really excited to compete next weekend in Wrentham for the D2 All-State Championship,” said Barrett.