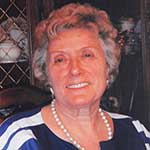 MELROSE — Erna Hooton-Koester, 85, a longtime resident of Melrose, passed away peacefully on Wednesday, May 18, at Glen Ridge Nursing Care Nursing Center in Medford.

She was married to the late Don Hooton of pilgrim stock, one of his ancestors was husband to Ruth, daughter of John and Priscilla Alden and of revolutionary ancestry through John Hooton, born in this country in 1724, who was a member of the Boston Tea Party, a revolutionary soldier fighting in the Bunker Hill Battle and a founding father of the “Old North Church” and one of its first wardens. Pew #61 has still the Hooton name plate attached.

She came to the United States in 1959, raised a family of three, and returned to work in 1970 as business administrator and office manager for Lindstrom Bros. Van Lines in Melrose for 13 years; for Colour Centrum Inc./Sidney Boguss Associates in Melrose for 3 years; for Patriot R.E. Development Co. in Peabody for 3 years; and for West Medford Community Center for 4 years, before taking early retirement. Erna continued to manage and administrate the family rental property and to practice her first love, music, in many ventures until her death.

Erna joined the Polymnia Choral Society in the spring of 1960 and was a singing member for over 50 years; the Trinity Church Choir in 1965 where she sang as soloist and choir member for over 45 years, and the Beethoven Society in the mid-1970s, giving solo performances for over 35 years. Erna sang solos and duets for the Vedanta Societies in Boston and Providence, R.I. beginning in 1990 and also sang the National Anthem for several years at the State House in Boston and the Esplanade at the Charles River.

She had additional singing affiliations with the American-German Saengerchor, Walpole; Paul Madore Choral, Salem; Senior Chorus, Melrose; and also sang for the Music Educators Conference, Boston; the Bicentennial choir, Melrose; and the Melrose Symphony’s fully staged Opera production of Tosca. Erna’s training and experiences were in classical, sacred, oratorio music as well as opera, Viennese opretto and other genres, such as American repertoire.

She studied voice at the conservatory of music in Dortmund, Germany, where she was also a performing member of the Institution’s affiliated Westfaelischer Madrigal Choral. She sang in the chorus of the Dortmunder Opera House and performed with the Dortmunder Musikverein, the city’s oratorio chorus. Her teachers were Dr.Hans Wedig and Dr.Rudolf Schroeder, Dortmund; Kammersaenger Rudolf Watzke, Berlin; Kurt Knoth, Hamburg, and opera singer Dorothy Schultes, Melrose.

Erna also was active in the community activities throughout her early years in Melrose, including the Florence Crittenton League, holding several offices and twice as president and for publicity; trustee at the Crittenton Hastings House, Brookline; Melrose Mothers Club; League of Women Voters and Melrose Women’s Club. Erna served at Trinity Episcopal Church in Melrose on various committees, including the vestry, delegate to the district and the convention, the music committee, the committee to restore/replace the organ and hiring organists. Erna was also a Lay Reader and Lay Minister at Trinity for 16 years and served at St. Paul’s Episcopal Cathedral for a lengthy time as Officiant for Evening Prayers.

The family wishes to express their sincere thanks and heartfelt appreciation to the staff at Glen Ridge Nursing Care Center and at Home Instead Senior Care, for their exceptional professional care and genuine concern for Erna.

Relatives and friends will gather in honor and remembrance of Erna’s life for her Funeral Service at the Trinity Episcopal Church, 131 West Emerson St., Melrose on Friday, June 3 at 1:30 p.m., followed by interment at Wyoming Cemetery, Melrose and a collation at Trinity Episcopal Church. Gifts in memory of Erna may be made to the Polymnia Choral Society, P.O. Box 760718, Melrose MA 02176. For online tribute or directions visit RobinsonFuneralHome.com.