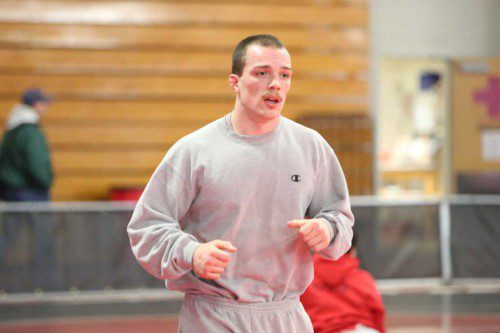 SENIOR CAPTAIN Evan Gourville warms up before competing at the 170 weight class in the All-State Meet which was held on Friday and Saturday at Reading High School. Gourville took fifth overall. (Donna Larsson Photo)

READING — As it turned out, the Warrior wrestling team had one representative at the All-State Meet on Friday and Saturday at Reading High School. That Wakefield wrestler, senior captain Evan Gourville, had a very good showing at the Hawkes Field House.

Gourville came in fifth overall at the 170 weight class and that performance has resulted in him qualifying for the New England Wresting Championships which will be held Friday and Saturday in Providence, R.I.

Gourville won his first two matches by decision. The senior prevailed by a 4-2 tally over Methuen’s Travis Manick. Gourville then pulled out a 6-5 victory over North Attleboro’s Nick Donahue in the quarterfinals.

In the semifinals, Gourville lost by fall to Dedham’s Eric Reyes. Reyes went on to be crowned the All-State champ at 170.

Jack Spicer, a junior, had qualified to compete at the All-State Meet at the 113 weight class. But he was unable to go because of injury.