Field hockey team had a dedicated group of players

Warriors worked hard to improve over the course of the season 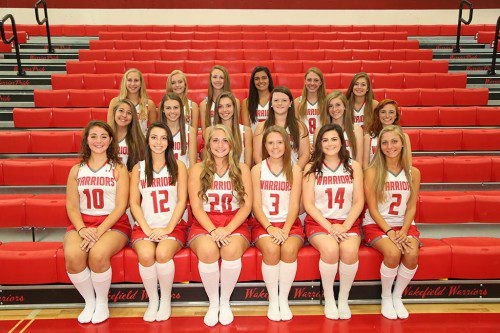 WAKEFIELD — With the fall sports season coming to a close, the Wakefield Memorial High School field hockey team concluded its season with a record of 4-11-1 in the Middlesex League Freedom division and 4-12-1 overall.

Unfortunately, the Warriors didn’t get to the state tournament which was one of the team goals headed into the season.

“Looking back at this year’s team, I see a group of 12 seniors who were dedicated to the sport,” Coach Cara Luca said of the 2014 Warriors.

On the field, coach Luca relied on the leadership of her three captains, Hayley Kaddaras, Marlena Nikosey and Megan McCarthy. They led the way for the Warriors on and off the field.

“They were the leaders of not only the varsity squad but the whole program,” Coach Luca said. “They showed leadership, motivated and raised team morale.”

It wasn’t the most successful season for Coach Luca and her squad and she felt her record wasn’t indicative of their ability. Of the overall record the coach said, “Could it have been better? Of course.”

She continued saying, “We lost to teams we should not have lost to. We had a few upsets which contributed to not being able to finish a game. The girls are much better than what the record shows.”

One thing coach Luca preached to her team was bring the intensity level that is needed to win games.

“From day one I told the girls that they need to play with intensity in practice and in games,” Coach Luca said. “They need to have the will and commitment to be the very best. Intensity will lead us to having a successful season.”

As for next year, there are a few areas that Wakefield can improve on.

“We have to improve on communicating better, keeping the intensity level up in practice and in games and improve on offensive and defensive corners,” said Luca. “For next year, we are losing five defenseman so we have some big shoes to fill.”

When asked to point to a game that she considered the team’s highlight for the season, the coach mentioned the match-up with Wilmington at home at Beasley Field. Wilmington scored in the opening minutes of the game and looked to be in control early. Coach Luca saw a new level of intensity in that contest.

“They played as a team,” she said. “Offensively and defensively they did not give up.”

Wakefield tied up the game with less than five minutes remaining to avoid defeat at the hands of the Wildcats.

Wakefield might not have had all of the components to put together a tournament run this season but that is not to say the season was a complete disaster. After all, the Warriors play in a very competitive Middlesex League and in the same division as one of the state’s top teams, Watertown, among many competitive teams.

Coach Luca saw some promising signs of improvement from her squad.

“I was very impressed by our defensive skills,” she said. “We had a strong defensive line with Mackenzie Foley at the sweeper position, Hayley Kaddaras, Michelle DeJoie, Gabby Raffaele, Shannon Livingston and Meaghan Kerrigan at the halfback positions. They did their best to protect our goalie Miriam Wood.”

Coach Luca likes what she sees for the future of the program.

“Looking forward, I have seven returning varsity players and a lot of potential that I have seen on the JV level,” she said.

Coach Luca said, “We are looking for more wins next year against the Liberty division.”

Also, the Warriors earned wins against Melrose and Stoneham from their own division at Beasley.

Next year’s captains, Julianne Bourque and Meaghan Hudson, will look to build on the foundation for success laid by this year’s team to assist them in the future.