Field hockey team hopes to have success in 2014 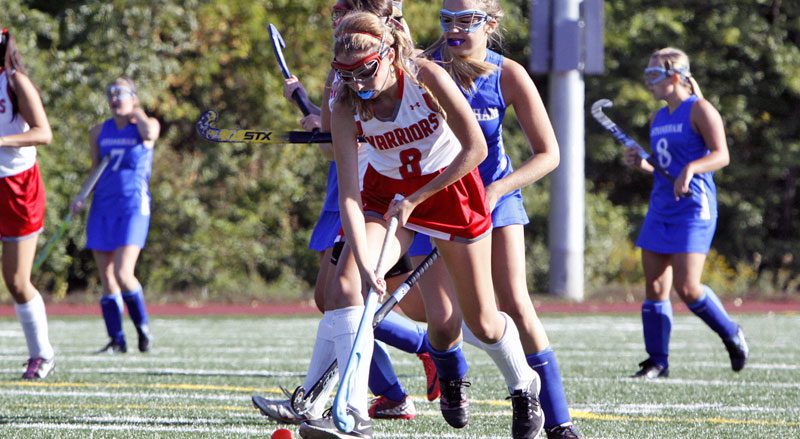 WAKEFIELD — The Wakefield Memorial High field hockey team will begin a new season today when they travel to Woburn where they will face the Tanners. The Warriors are out to improve on the 5-9-4 overall record (5-7-4 in the Middlesex League Freedom division) they posted a year ago.

Coach Cara Luca has a number of returning players from last season to help the transition led by captains Megan McCarthy, Marlena Nikosey and Hayley Kaddaras. All three are seniors.

McCarthy and Nikosey were midfielders a year ago and Kaddaras played on defense.

“These girls, they work very well together. They see the field really well so we’re hoping all of that comes together tomorrow against Woburn,” said Luca, in her third year as head coach.

A lot of her defensive players from last season have graduated so Luca knows that this will be an area of concern but feels the players filling in are up to the task.

“Seeing the defense this year in the scrimmage, although I know Revere is weak, I feel confident in them,” she said.
Indeed, Wakefield beat Revere 8-0 in its scrimmage.

“I know Revere isn’t a particularly strong team but we did well. We passed the ball well and we had good communication. Our stick skills have improved a lot from last year.”

Stanfield played on offense last year, while Horrigan, Stewart, Murphy, Hudson, Raffaele, Kerrigan and Livingston are all on the varsity for the first time.

As for which team in the league will be the team to beat, Luca made no bones about naming Watertown as the likely powerhouse of the league.

Luca feels that some of the rebuilding teams such as Winchester and Arlington may provide some good competition for her squad.

“For us it’s always a battle between us and Wilmington.They’re our other rival in our division,” she said.

Wakefield opens up the season this afternoon at 3:45 p.m. against Woburn at Woburn High School. The Warriors first home game is Wednesday, Sept. 10 when it hosts Lexington at 3:45 p.m. at Beasley Field.