NORTH READING — It was do–or–die for the North Reading High field hockey team last Friday night as they took on visiting Arlington Catholic in the final game of the regular season. If the Hornets won, they would qualify for the Div. 2 state tournament. If they lost, however, the season would be over.

The Hornets made it a memorable Senior Night as they edged the non–league Cougars, 1–0, to complete the season sweep. Julia McDonald had the lone tally of the night with just seven minutes to play in the game. 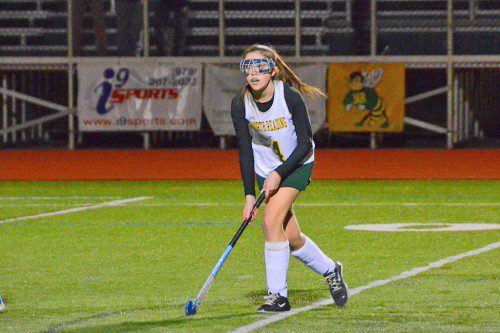 Goalie Julia Perrone made 15 saves to record the shutout.

The Hornets, who honored the nine senior before the game, finished the year at 9–8–2.

At Lawrence, the day before, Coach Muzio’s squad rolled to a, 4–1, victory over the Lancers in another non-league contest.

Liz Carlson led the attack with two goals while Gretchen Burgholzer and Lauren Artone had the two other goals.

Perrone made five stops as she allowed the one goal in the second half.

“It was a great game on offense for us,” said Muzio.

On Oct. 27, the Hornets lost to Lynnfield, 1–0, as the Pioneers completed the season sweep.

Perrone had ten saves as Lynnfield scored their goal in the second half.

“That was a hard–ought game,” said Muzio, whose team went 6-8-2 in the Cape Ann League this year.

The Hornets visited Ipswich on Nov. 4 in the first round of the tournament (results not available at press time). If North Reading won, they would visit Triton on Nov. 6 at 2:30 p.m. in the quarterfinals.