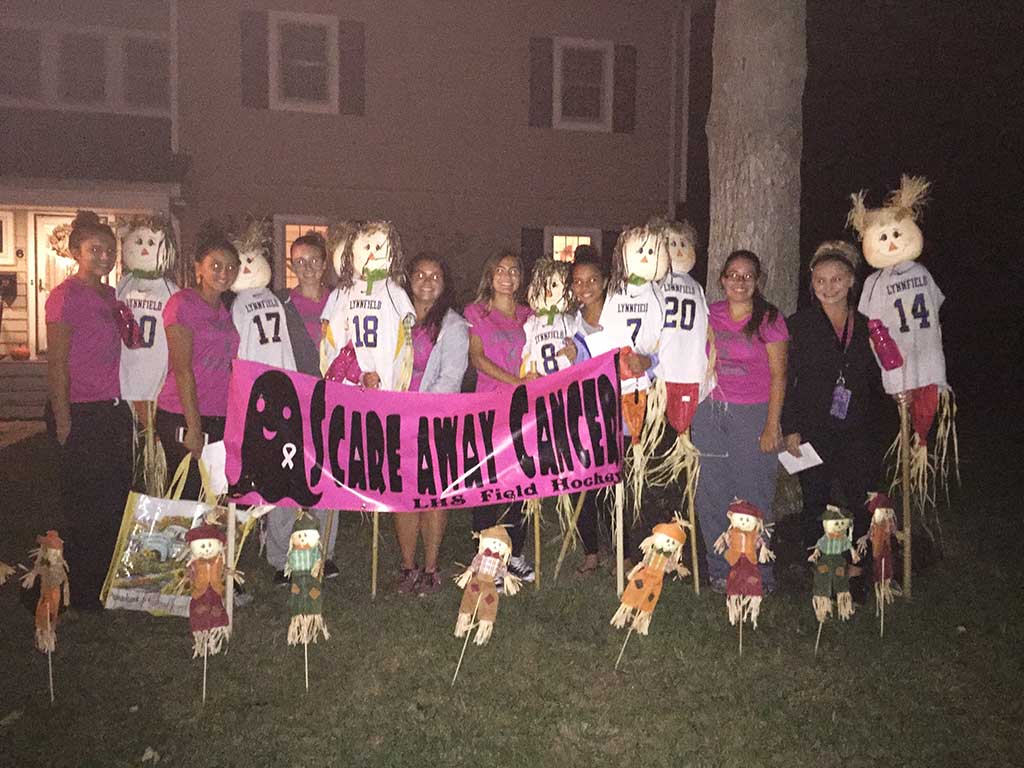 LYNNFIELD — In addition to preparing for their competitive season, the LHS Pioneers field hockey team has initiated a creative approach to its fundraising efforts to benefit breast cancer research.

The Pioneers have long supported Play4TheCure with an annual game each October, complete with pink accessories and a huge game day bake sale of pink goodies. That tradition will continue. This year’s varsity Play4TheCure game will be played on Tuesday, Oct. 18 at 6:30 p.m. at Pioneer Stadium.

But also this year, the girls have added a fun twist with a “Scare Away Cancer” fundraiser. It’s similar to pink flamingo fundraisers when the lawns of supporters get “flocked” overnight except they’ve substituted a dozen miniature scarecrows plus one large scarecrow for the flamingos and added a pink and black “Scare Away Cancer” banner to the mix.

The girls started their campaign during tryout week when they held a car wash plus a dine out fundraiser at Chipotle and used the money they raised to purchase their “spooking” supplies.

“Their goal this year was to raise more money than last year’s impressive $2,650. They have big goals and knew it was going to take a lot of hard work, so they decided to start it up early with hopes it really it takes off by October,” said team mom Mei Patterson, mother of field hockey tri-captain Lilli Patterson.

She said the senior girls kicked off their “spooking” fundraiser last weekend when they outfitted the large scarecrow with a field hockey jersey and decorated a local lawn with it plus the team of mini scarecrows and banner. These scarecrows are left on residents’ lawns for 48 hours. “The homeowner is asked to help spread the message by making a $20 donation and giving another address to ‘spook,’ passing on the fun,” Patterson explained.

The underclassmen joined in on the fun later in the week, with the seniors serving as the drivers and the players rotating the use of their cars.

A new scarecrow has joined the team this week. She’s dressed in pink with a boa and tutu and serves as a “survivor spook,” she said.

Residents and supporters are also asked to join the LHS field hockey team on Wednesday, Oct. 5 at Chipotle on Walkers Brook Drive in Reading for their next big fundraiser during which 50 percent of all sales made from 12 p.m. to 4:30 p.m. (except gift cards) will benefit their Play4TheCure campaign. Noting the generosity of Chipotle’s 50 percent pledge, Patterson said, “They have been wonderful to deal with.” The team will receive flyers to distribute to supporters within the next week.

The field hockey team is donating 100 percent of all the proceeds they raise to Play4theCure, which supports cutting edge research of the National Foundation for Cancer Research (NFCR) whose scientists are considered leaders in personalized medicine and targeted cancer treatments. NFCR’s mission includes facilitating collaboration among scientists and across disciplines to “accelerate the pace of discovery from bench to bedside” with the goal of curing all types of cancers.

The field hockey team is once again engaged in a friendly competition with the volleyball team, which raises money for breast cancer research through its annual Dig Pink fundraiser to benefit the Side-Out Foundation (see related story). The team that raises the most money will win a pizza party.