Wakefield travels to Gloucester tomorrow for Round 1 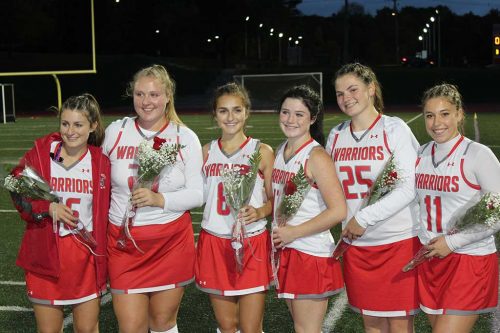 THE SENIORS on the WMHS field hockey team were honored at Shaun Beasley Field on Thursday before their game against Melrose. Pictured from left to right are Bernadette Mylan, Jane Yardumian, Olivia Cameron, Alyssa Vacca, Julianne D’Ambrosio and Vanessa Kaddaras. (Dan Pawlowski Photo)

WAKEFIELD—With the final two games remaining on the schedule for Wakefield Memorial High School’s varsity field hockey team, the possibility of qualifying for the MIAA State Tournament for the first time since 2007 was still on the table, but they could not lose.

Head coach Cara Luca’s girls pulled through in the clutch and got the points they needed to punch their ticket to the dance, ending a 10-year drought of missing the Tournament.

On Thursday, the Warriors faced off against Middlesex League rivals, Melrose. The Red Raiders took an early lead, but Vanessa Kaddaras responded just a few minutes later to level the score in a game that eventually ended in a 1-1 tie.

That result meant that Friday’s matchup with Stoneham became a must-win game, a tie wouldn’t be enough.

The Warriors came out full of energy.

“I think they’re working on adrenaline right now,” Coach Luca said after the win. “The girls have been pumped for this game.”

With the prospect of getting into the tournament lingering over the game, the Warriors wasted no time and quickly scored three goals in the first half.

In goal, Alexa Pesce kept the Spartans off the board, while Vanessa Kaddaras found the net twice in the first 10 minutes before Stoneham could respond.

Kaddaras fed Olivia Cameron to put the Warriors up 3-0 halfway through the first half.

Cameron and Kaddaras would link up again, 30 seconds into the 2nd half, with Kaddaras netting her third goal.

“The speed on the forward line was awesome, we had a ton of shots today,” Luca said. “Our passing was really good taking the ball up the field and leading to shots on net. The way that they give and go with that ball, the talking and communication on the field made it very helpful.”

Stoneham was able to get one goal back a few minutes later, but Wakefield held a commanding 4-1 lead with time winding down.

Just over a minute after the Spartans scored, the Warriors were back on the attack. Junior attacker Ava Vaughn scored to make it 5-1, it was the first goal of the year for Vaughn.

With eight minutes remaining, Cameron scored to make it 6-1. Stoneham got a goal less than a minute later, but Pesce and substitute goalie Norah Coyne were able to keep them off the board for the final seven minutes of the game and the Warriors won 6-2.

“We were looking for this,” Luca said. “We left it until the last game of the season, but it’s official.”

Coach Luca commented on her team’s run to get into the tournament as she said, “We clicked more second half of the season and played more like a team.”

She added, “Defensively we stepped up, it helped that we have different formations that we use against different teams. Alexa and Norah both had great seasons this year too.”

The win sets Wakefield up for a postseason date as they eagerly wait for the drawing on Tuesday to find out who their first round opponent will be.

The 14-seeded Warriors will travel to Gloucester to take on the third-seeded Fishermen in the first round of the Division 2 North tournament tomorrow night at 7 p.m.