Field user fees won’t be charged until next fall 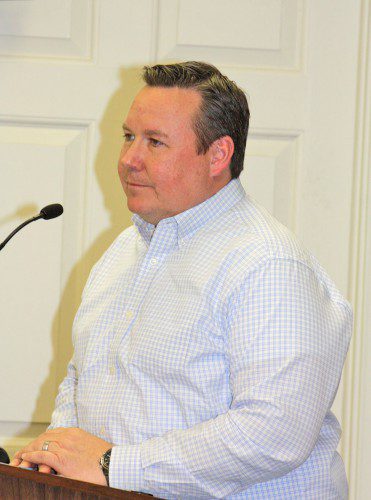 LYNNFIELD — New user fees for field usage will not be imposed on spring leagues, Recreation Commission Chairman Matt Monkiewicz told the selectmen during his budget presentation on March 9.

Monkiewicz explained that the commission is still in the process of determining the final fee structures with the goal of having it ready for the fall sports season.

“We have our first draft of the fields usage policies and fees that we’re working through. We have yet to establish a final fee structure. As we get into this and try to resolve it, we end up with more questions,” Monkiewicz said. “We’re working on the field requirements from the DPW from the leagues and exactly what the expenses are so that we can establish the right fee structure,” he said.

Overall, the selectmen were impressed by the growth of the recreational offerings provided by the Recreation Commission and the fact that the only increase in the department’s budget was $880 to cover the 2 percent salary increase required under the union contract. The remainder of the budget was level-funded. The total budget request for FY’16 is $48,752. Of this amount, just under $3,900 is proposed to be spent on miscellaneous expenses and $44,880 on salaries.

All other program expenses are covered through uses fees through Recreation’s revolving account. “We are self-funding all of our programs,” Monkiewicz said. He said the commission was “very grateful for the additional resources we were given this year” by the town. Those funds enabled director Julie Mallett to go from part-time to 35 hours per week while the hours for Joe Maney, the co-director in charge of fields and concessions, were increased from five hours to 19 hours per week.

Monkiewicz said a key achievement during the past year included the installation of a new online registration and field management program, which is being used more each day, and the addition of several new programs. These included the large fireworks display in October and several events coordinated with MarketStreet, such as concerts on the green, while also taking over a few programs previously offered by Community Schools.

“Our goal is to increase the participation in rec events and/or programs by 20 percent. With some rough estimation of some of those biggest events we ended up increasing (participation) 189 percent. So we are really happy with the progress that Julie and Joe have made in terms of the number of people we’re reaching,” Monkiewicz said.

Additionally, they’d like to improve existing programs. “There are some things we have been doing for a long time that we’d like to do better, including the tree lighting,” he said. Participation at the tree lighting declined this year due to rainy weather.

“We’d like to introduce one more major event, similar to the fireworks. Right now we’re calling that Lynnfield CountryFest. We’ll see what that morphs into,” he said.

“On the operations side, we got a lot of work to do still,” Monkiewicz admits. For instance, recreation was to meet later in the week with representatives of the various sports leagues regarding usage of the new concession stand at LHS to “hammer some of the details out,” Monkiewicz said.

Later this year, they anticipate conducting and then publishing the “results of a rec center needs assessment feasibility study,” he said.

“It’s phenomenal that you’re increasing programs and the number of people that are attending all of your activities,” Nelson said, adding that he likes the way they assess what works, what doesn’t and then take the steps necessary to move forward. “I think it’s very impressive what you’re doing for the town and the community and the people that live here,” he said.

Selectman Phil Crawford said he appreciated that the Recreation Commission gave the “cleanest budget presentation that I can imagine. You have only asked for the 2 percent pay raise for your employees. There is basically nothing else here, which is unheard of” due to the ability to utilize the revolving account to cover other expenses.

Crawford said that their “fantastic” programming is “very well received,” and added, “You have more programming available to you. You have more facilities available, so I’m sure this will expand and you will get that additional participation.”

Selectman Tom Terranova also thanked Monkiewicz and the board for the job they have done. “You have really taken this far beyond the next level and thinking way into the future so I really want to thank you and the entire board for beyond an excellent effort,” he said.

Terranova said he has been asked by a lot of people about the new fee structure. After reviewing the Memorandum of Understanding (MOU) drafted by the Fields Committee, he noted that it contained “some different fees.”

“You need to tell everybody what is going on for the fees for the fields,” Terranova said.

Monkiewicz explained that “the Fields Committee set an arbitrary fee with an idea of how it would be allocated. As we began to talk about it, it became evident that we really needed to solve for what the costs are that are associated not only with long-term capital costs, as part of that fee will be set aside for capital, but the annual maintenance cost.”

From that point, they will determine the costs that need to be passed on to the leagues, he said.

For instance, Monkiewicz is working with the baseball league to determine their maintenance needs and then they’ll work with the DPW “to assess what the costs are going to be.” He believes they’ll have such details resolved within 30 to 60 days and will publish field use guidelines and fee policy at that point.

“That’s our objective, to get that settled. There are going to be no fees imposed for the spring. Everything is going to start in the fall,” he said.

Terranova asked Monkiewicz if he thought the fees could be “higher than the proposed fees?”

“I think it could be. We have yet to set that. We’ve spent a lot of time on some of the special event fees and some of the rules,” Monkiewicz said, adding, that they need to follow up on aspects such as field light fees for two-hour and four-hour blocks and variances in fees between town leagues and private leagues.

“There are a lot of moving pieces. Joe (Maney) has done a great job getting research and Phil (Crawford) has helped us in terms of what other towns are charging, so we’re going to stay within that range. I wouldn’t expect it to be extraordinarily more but there is a chance it would be higher,” Monkiewicz said.