Final meet at Beasley is an emotional one 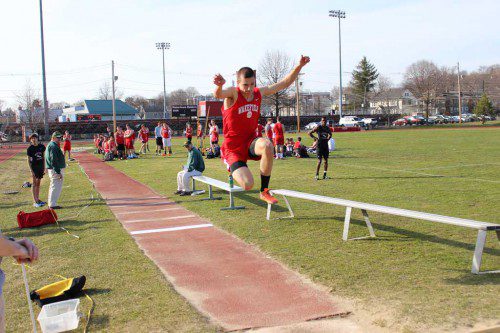 SENIOR Joe Hurton had a personal best in the triple jump on Tuesday against Woburn at the Beasley Track and Field facility. Hurton’s distance was a 43-11 1/2.

WAKEFIELD — Although the Warrior boys’ track team’s makeup meet against Woburn wasn’t scored, it was an emotional day on Tuesday at the Beasley Track and Field for the seniors of the Wakefield team as they were competing at home for the final time.

“The meet against Woburn, although not scored, was an emotional meet since it was the last time our seniors would run together and at home,” said Coach Ruben Reinoso. “I told the seniors before the meet that the coaching staff was really proud of the way they carried themselves, represented their families, the town and the program. I know that they left the program better than when they started.”

There were a handful of boys just missing out on the sub 5:00 mile for the season as junior Alex Guerriero (5:00.6), sophomore  Ryan Sullivan (5:02), freshman Tommy Lucey (5:05), junior Chris Skeldon (5:06), and sophomore David Melanson (5:11) were so close on the 85 degree temperature day. Seven boys were able to break five minutes this season.

Captain Massabni returned from an injury and sickness to run his first race since the fall.

“Massabni will be an irreplaceable member of the team as he will be graduating after devoting four years to helping this program get to the next level,” said Assistant Coach Perry Pappas. “His role was much more important than scoring points for the team. As a freshman he started off running times in the 9:00 minute range and by the time he was a junior he had a personal best mile of 5:35. His hard work, determination and positive attitude spread throughout the team as he motivated others to work just as hard.”

This past weekend Tyler Strauss and Alex McKenna participated in the Absolutely Last Chance to Qualify Meet in Burlington. They are both trying to get accepted into the D3 heptathlon which we will be announced by Friday. In order to be accepted they need to be among the top 12 in D3.

The Warriors are now preparing for the Div. 3 state meet which will be held on Sunday at 1 p.m. at Durfee High School.