Russo throws the javelin, girls have an entry in 800 sprint medley relay 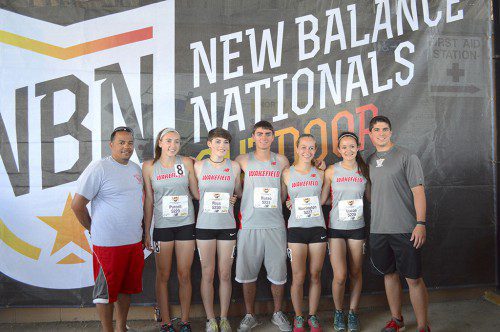 The Warrior girls had an entry in the 800 sprint medley. The team of sophomore Ana Lucas, senior Sam Ross, junior Abby Harrington and sophomore Allee Purcell combined to run a time of 1:52.54 which was good for 60th place.

The girls ran a good time of 1:53.54 which was .06 faster than their seed time.  Lucas started the relay by running the first 100 meters. Ross also ran the 100 meters followed by Harrington running the 200 meters. Anchoring was Purcell running the 400 meters.

Ross ends her high school career on high note as this event, which Wakefield has never run before, becomes her second school record. The same can be said about Harrington but she has another year to add to the record books. As far as sophomores Purcell and Lucas, the future is very bright and a lot of records are not safe with the both of them returning next year and the following year.

Kevin Russo, a senior, competed in the javelin and had a throw of 171-8 which resulted in a 28th place finish.

Russo too qualified for the championship division and this is also a first for the boys’ team to qualify for this division. His throw of 171-8 will not go on the record books but what many people don’t realize is that Russo had to change his approach during the event and therefore threw a pretty good throw with a shorter approach.

“The coaches and myself all agree that Merrimack College is getting one of the best throwers in the state of Massachusetts,” said Coach Ruben Reinoso. “The athletes all ran under the club name Warriors Track and Field club. This is a club which has been created to promote track and field in the town of Wakefield.

“On behalf of all the athletes and coaches the Warriors Track and Field Club would like to say thank you for making this dream a reality for the athletes of Wakefield,” concluded Reinoso.