Flames at substation knock out power 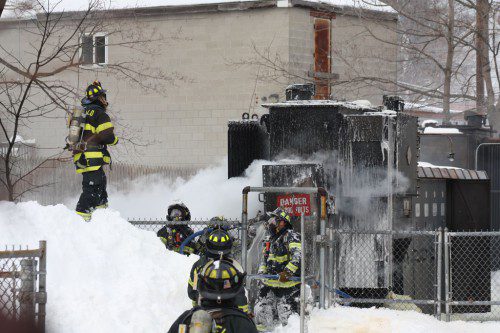 A firefighter scrambled atop A five-foot high snowbank at the Wakefield Avenue substation to determine if all the flames have been knocked down. (Maureen Doherty Photo) 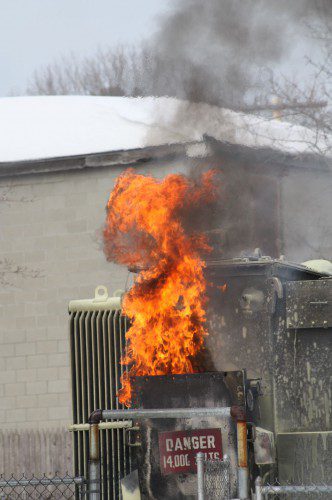 A BALL of orange flames and black smoke rises above the transformer at the WMGLD substation on Wakefield Avenue Wednesday afternoon as its fuel source burned off. (Maureen Doherty Photo)

WAKEFIELD — A major fire in a transformer at the McGrail substation, which sits at the corner of Wakefield Avenue and Jefferson Road, knocked out electricity to 300 customers of the Wakefield Municipal Gas and Light Department (WMGLD) yesterday afternoon for about two hours.

The outage affected residents and businesses on Water Street, a portion of Albion Street and Main Street to the area of the J.J. Round Playground.

“There was a malfunction of some kind, which caused an explosion,” explained Fire Chief Michael Sullivan today. “The explosion blew the transformer apart and between 60 and 70 gallons of oil were released onto the substation property. The oil also splattered onto a duplex home at 50-52 Jefferson Rd.”

The transformer, which takes power from high tension wires and reduces the voltage to what the town uses, holds 1,420 gallons of oil.

A tree next to the substation also caught fire but was quickly put out, said Sullivan. The tree was charred by the fire, but damage did not appear to be severe.

Sullivan said no one suffered injuries while at the fire, nor did the materials used to extinguish the fire result in a toxic condition in the neighborhood.

WMGLD General Manager Pete Dion further explained that an old cable that feeds the transformer caused a malfunction that resulted in the fire. His employees were quickly notified about the substation fire and they responded to the scene immediately.

Sullivan said his department got a call from the Police Department at 1:45 p.m.

On the arrival of Wakefield firefighters at the substation, a called was placed to the Lynnfield Fire Department and firefighters from that town responded immediately with a supply of foam stored in a trailer needed to extinguish the fire.

“We didn’t use any water because it was an electrical fire,” said Sullivan. “Instead, we used 30 gallons of Lynnfield’s foam and dry chemical and carbon dioxide extinguishers to knock it down.”

From Wakefield, Engines 1 and 2 and Ladder 1 responded along with Clean Harbors of Woburn, the company hired to handle the clean-up.

He also praised the efforts of the crew from the WMGLD.

“Everyone did very good work,” he said. “The WMGLD crew was a big help.”

In addition to the substation fire, the Fire Department responded to 10 other calls yesterday, including 50 Hart’s Hill Rd. for a stuck elevator, 18 Hamilton Rd. for a carbon monoxide detector malfunction and 910 Main St. for a water problem.