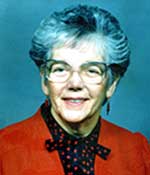 Florence was born on Sept. 14, 1921 in Boston. She was one of three daughters of the late Loughlin H. and Anna M. (Shillady) MacLean. She was raised in Everett, where she graduated from Everett High School, Class of 1939. On Nov. 16, 1946, she was married to Robert E. Hall and they began a family in Everett before moving to Melrose with their two sons. Florence worked as a secretary for New England Power and later attended Northeastern University, where she received a degree in Library Science. For 18 years, she enjoyed her work as a librarian at the Melrose Public Library.

Always active, Florence enjoyed many activities around Melrose and stayed busy at home with a variety of hobbies. She was an active member of the First Congregational Church in Melrose, where she sang in the choir and served as moderator. She also volunteered at Melrose-Wakefield Hospital for several years and was a former member of the Hillcrest Church in Melrose. Flo loved collecting cut glass, especially her favorite pieces from Daisy and Button and enjoyed dried flower arranging and raising African Violets. In her younger years, she played the piano by ear and enjoyed playing the cello.

Flo was a sociable and kind woman who made friends easily. She had a particular bond going back several decades to a group of Everett friends known as “the club.” She stayed in contact with many of them and enjoyed the many relationships she made from church and around Melrose. She loved Christmas parties with family and cherished her two sons and her four grandchildren.

Flo was the beloved wife of the late Robert E. Hall, with whom she shared 48 years of marriage. She was the devoted mother of Donald B. Hall and his wife Fran of Rockville, Va. and David A. Hall of Melrose. She was the caring sister of the late Eleanor Twigg and Louise Parisi. She was the dear sister-in-law of Dorothy Allen of Melrose and the late Lyle Hall, Reginald Hall, Warren Hall, Nettie Turner and Sadie Stockbridge. She was the cherished grandmother of Emily Sharp and her husband Ryan of Colorado Springs, Colo., Geoffrey Hall and his wife Allie of Richmond, Va., Gregory Hall of Rockville, Va. and Alice Hall of Richmond. She is also survived by many nieces and nephews.