Flower power breaks out at the Beebe 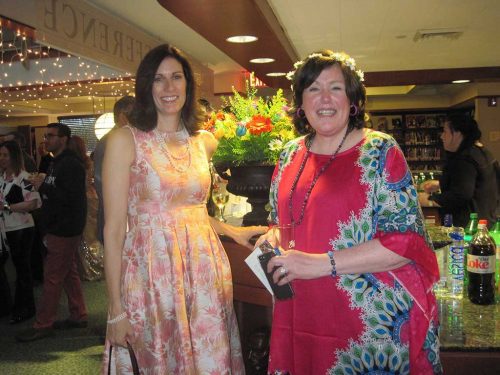 WAKEFIELD — A bad moon rising over the Lucius Beebe Memorial Library on Main Street did nothing to dampen the spirits of those who attended Blossoms at the Beebe, held this year on Saturday night, April 28.

The theme of 2018 the annual event, now in its 11th year, was “The Sixties” and it showed. Flower power was everywhere along with mini skirts, bell bottoms and white go-go boots. And the music? All the oldies but goodies, from The Beatles and Creedence Clearwater Revival to The Rolling Stones, played by Rule of 3.

Said Library Director Catherine McDonald, “For the past 11 years, volunteers have made Blossoms at the Beebe happen. The volunteers handle everything, from decorating the library to arranging for the food. Their dedication is so wonderful and greatly appreciated.”

Laurie’s 9:09 Catering offered food to guests, including hors d’oeuvres and beef tenderloin at stations on both the upper and lower levels of the Library.

Wakefield native Valerie Giglio, attorney, musician and author, was featured VIP speaker. She also signed copies of her book “Singing In My Own Key: A Vocalist’s Triumph Over Stroke,” the story of her miraculous journey to overcoming paralysis, regaining her singing voice and returning to the stage just one year after suffering a catastrophic stroke at age 42.

Fundraiser proceeds support services at the Beebe Library, cultural events and many Chamber of Commerce projects that enhance the civic and economic life of Wakefield.