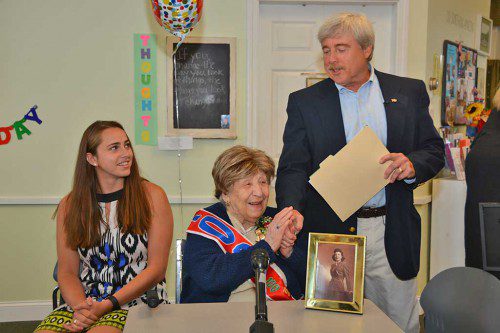 A DAY FOR CLARE. Selectman Stephen O’Leary brought congratulations from the town on the occasion of Clare Picciuto’s 100th Birthday. The Selectmen declared her birthday “Clare Picciuto Day in North Reading. Seated at the left is Clare’s granddaughter, Elisabeth Watson. (Bob Turosz Photo)

NORTH READING — There’s been a lot of joy and satisfaction in Clare Picciuto’s life since she was born in Boston’s North End on Aug. 19, 1916. But last week may have been her best week ever.

Clare celebrated her 100th birthday in the Edith O’Leary Senior Center among family and friends and simultaneously became the oldest and newest graduate of North Reading High School when she was presented with an honorary high school diploma, fulfilling a lifelong dream that was thwarted when she had to leave school to help support her family in the Great Depression. 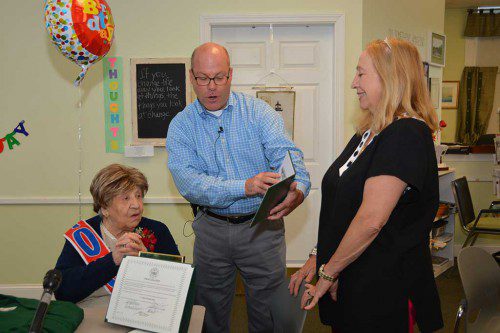 Superintendent of Schools Jon Bernard awarded the NRHS diploma, making her a member of the Class of 2016. He also presented her with a high school cap and gown for her to wear at her birthday party, which took place Aug. 20.

As Bernard read the diploma, Clare clasped her hands together and exclaimed, “I graduated!”

Selectman Stephen O’Leary brought greetings from the town as well as a special proclamation which made Aug. 19 C. Clare Picciuto Day in North Reading.

“I’ve known this lady for almost 50 years. I’m thrilled to be here and delighted,” said Selectman Stephen O’Leary, who grew up with and attended high school with Clare’s daughter, Deb. “For all the years I’ve known you, you’ve always been gracious and helpful and willing to listen.”

O’Leary said Picciuto, who has lived in North Reading for 49 years, is part of the fabric of the community. “You’ve been an active participant and a good neighbor and friend. The community loves and appreciates you.”

The proclamation reads in part: “Born on Aug. 19, 1916 in the North End of Boston, the seventh of 10 children, Clare has lived in North Reading for 49 years, a vibrant member of the community working as a cafeteria worker, volunteer at the senior center and a regular at the various bowling leagues, participant in the senior citizen tax rebate program, working in both town hall and the senior center. The Board of Selectmen proclaims Aug. 19, 2016 as C. Clare Picciuto Day and urge all citizens of North Reading to join in wishing Clare a happy 100th birthday.”

Clare was delighted with the celebration. “This doesn’t happen every day,” she commented, as Senior Services Director Mary Prenney presented her with a birthday cake topped by a single candle, which Clare proceeded to blow out.

“You’ve done so much in your life that you earned your diploma through everything you’ve ever done and all the creative and social tasks you did to bring up our family and make an impact,” said her daughter Deb.

“My mother used to open up the encyclopedia and dictionary when I was a kid and look up words and topics with my friends to help us educate ourselves.She was always interested in making the best for herself and others around her. She went through the school of hard knocks and kept learning. It was so inspiring. She’s the child of immigrants. My mother was an inspiration for my daughters to continue their education,” said Deb.

Asked for her secret to longevity, Clare responded: “Olive oil and an apple a day.”

She got her driver’s license when she was 21 and still has a valid permit, although these days her daughter goes with her when she drives up and down the street.

Looking back on a long life, Clare said things have changed for the better.

Clare was forced to drop out of school in the 10th grade to help support the family, something she always regretted but understood because everyone contributed. Her first job was making curtains for $6 a week but she continued to learn from her family, parents, aunts and uncles.

Clare said the most important thing she learned “through the school of hard knocks” was how “to get along with people.”

“Today, nobody gets along. That’s why they’re all shooting each other. Terrible. Learn to get along with your fellow man.”

Clare was born in Boston’s North End on Aug 19, 1916 as the seventh of 10 children that were born to Rose and Ralph Capachietti. Rose and Ralph were immigrants from central Italy. She went to Boston schools and during the Great Depression started night school and also worked in the garment district in Boston. Clare had great musical, artistic and athletic talent. Her favorite memory was making wine with her dad, while they listened to Italian Opera. During WWII she made jackets for the U.S. Army, as part of the war effort. She was also caring for her mom and younger brothers at this time. She got her driver’s license at age 21, with help from her brothers. Later she moved with her family from the North End to the West End of Boston living down the street from Leonard Nimoy. During the big band days she enjoyed going out in Boston with her friends, where she met Tony Bennett, and has the photo to prove it.

Then she met her husband, Joe Picciuto, in her late 30s. He had been her childhood neighbor and he also stayed close to home caring for his widowed mother and younger siblings after the war. They married in November 1955 and moved to the Malden/Medford area, after their Miami Beach honeymoon. In 1956 they had a daughter, Deb Picciuto. Clare returned to work at a Bridal Salon in Malden and as a sales person she helped many a bride and prom going girl find their dream dress. In 1967 the family moved to North Reading where she still lives at 26 Lindor Rd. It was a big change for her and the family but a welcomed one. Clare often remarked that the old Jones Brothers Store in North Reading had many things, but not a needle and thread. Soon she was re-employed in the garment industry working in Stoneham, making custom drapes, then in Lawrence making girls’ athletic tunics. When her daughter was older Clare took a full time job at the Compugraphic Company in Wilmington and retired from there at age 67 with many wonderful friendships.

Her new pastimes would become candle pin bowling in NR and paying cards with her NR/Reading card club. She also resumed her love of art and painted some wonderful oil paintings at the NR Adult Education Program. Later after Joe, her husband, died in 1999 she became a Senior Volunteer at the North Reading Town Hall and then The North Reading Council on Aging where she continues to participate today. Due to her love of music she joined the Council on Aging Choir for a time and enjoyed signing at town events. Last season she was still bowling at the candle pin lanes in Wakefield, where she got several spares and a strike or two, of which she is very proud.

Clare benefited tremendously from the support of her extended Capachietti/Picciuto family, her new and old Lindor Road neighbors, St. Theresa Church volunteers and the Morlani Family, the First Parish Bedford Minister John Gibbons, the North Reading Senior Center staff, Health Department Nurse Suzanne Swansburg, North Reading town employees, The Sanborn Home Care and Adult Day Center in Reading, Mystic Valley Elder Services, Lahey Clinic, the VNA of Middlesex East, the NRHS RYLA volunteers and Specialized PT in North Reading. The care and concern these organization and individuals have provided to her has been appreciated by her and family.