Advance to Northern Regional on March 21 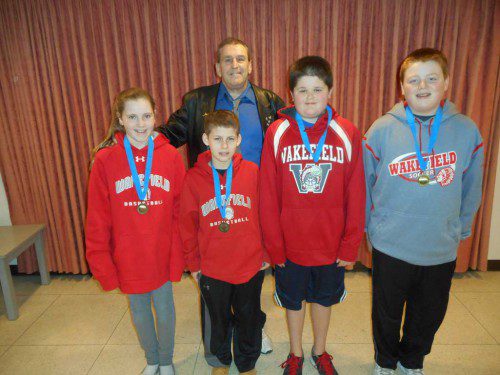 ANDOVER — The Knights of Columbus District 21 Free Throw Championship was held on Saturday, Jan. 31 at the Andover Knights of Columbus, Council 1078. Of the contests in the ages 9 through 14 groups, Wakefield had five children competing and four were winners.

These children had won their local K of C competitions on Jan. 10 and were competing against the winning children from the other towns in the district which included Beverly, Manchester, Chelmsford, Middleton and Carlisle.

The top marksman was Liam Cosgrove who made 22 of 25 shots and made the most of a second chance. In Wakefield, Cosgrove finished second behind Lucas Smith but since Smith went to the Super Bowl and was unable to compete, Cosgrove moved up and was able to compete.

K of C District Deputy Jack DeCourcy of Andover congratulated all the winners and gave the winner’s medallions to Council 104 Free Throw chairman, Bob Curran, to present to the winning girls and boys.

All the winners will now advance to the Knights of Columbus Northern Regional Free Throw Championship on Saturday, March 21 at the Parker Middle School, 45 Temple St., in Reading. Registration will start at 8 a.m. with the competition starting at 9 a.m.

The Wakefield kids will be competing against the winners from K of C Districts 20 to 28 for a chance to advance to the K of C State Championship on March 28 at Nichols College, 120 Center Rd. in Dudley. Park in Lot M and register at 9 a.m. for a 9:30 a.m. start.