Dedicated volunteer gave of himself 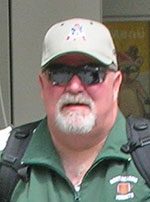 Born in Winthrop on August 18, 1956, he was the son of the late Fred and Margaret (Minichiello) Chalmers. He was a graduate of Bentley University. Fred worked for many years as a Senior Financial Analyst, for the Digital Equipment Corporation and for Compaq (Hewlett Packard).

“People around town recognize Freddie from years of volunteering across every youth sports field in North Reading for 15 years. His distinctive whistle and coaching voice recognized by many! He loved the kids and counts many as surrogate sons and daughters! His love of North Reading and its small town flair for celebration led Fred to volunteer on the Bring Back the Fourth Committee.”

His greatest joy were his sons, Nicholas and Christopher and coaching them over the years. His favorite spots were the High School practice field and Ipswich River Park. His favorite times were holidays with his family, especially vacations to Maine and Disney World.

Family members include his loving wife of 32 years, Kathleen (Curran) Chalmers, his sons, Christopher and Nicholas Chalmers, all of North Reading; his brother, Douglas Chalmers and his wife Mary and their children, Gina and Brian Chalmers, all of Winthrop; also many beloved cousins, nieces and nephews.