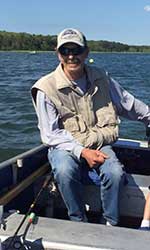 NORTH READING — Frederick Paul Roth died on Thursday, December 8 at his home in North Reading surrounded by his loving family. He was a veteran, born and raised in Melrose.

Ric was born in Melrose, on December 17, 1952 to the late Robert Anthony Roth, Sr. and the late Nancy M. (Webber) Roth, where he attended St. Mary’s Elementary and Melrose High Schools. With a love of the sea and a great desire to protect his country and loved ones, he enlisted in the U.S. Coast Guard. He served there for four years until 1974, after which he married his wife, Linda K. Tornrose of Melrose and eventually settled in North Reading where they raised their two children. A devoted father, he leaves behind his son (Kurt Roth, of Kittery Point, ME with his wife Emily), and his daughter (Susan (Roth) Santos of Melrose with her husband Michael), as well as four grandchildren. He was a loving and caring brother to Robert A. Roth, Jr. of Punta Gorda, FL, Nancy Roth of Stoneham the late Gail Face of Melrose, Laura Sorger of Melbourne, FL and Vaughan Roth of Shrewsbury.

As a youth, Ric was a member of the U.S. Naval Sea Cadet Corps of Boston, a chapter established in 1960 by his father. For many years, he worked at the Cryovac sheet metal division of WR Grace, where he met many of his longtime buddies. He was an avid fisherman and boatman, and loved his time spent with his grandchildren (Kaleb, Jason, Nadia and Mikey), who will miss their “Papa” dearly.

Ric (or “Freddy”, as he was known to many of his friends) also leaves his wife of 42 years, Linda K. (Tornrose) Roth of North Reading, who has been his loving and faithful companion since high school.

A celebration of Ric’s life will be held by the family in Melrose on December 17, 2016. He will be missed deeply missed by his family, friends and neighbors.