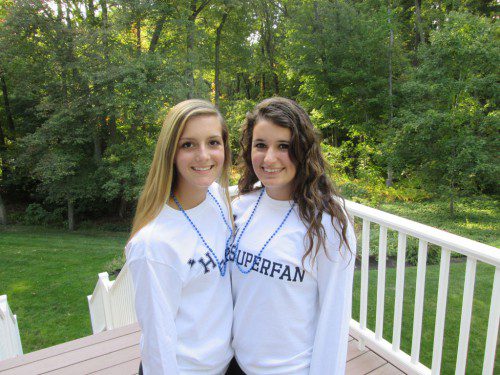 SUPER spirited students. Modeling the long-sleeved LHS Superfan t-shirts they designed are Lexi Yannone (left) and Olivia Skelley. The girls created the LHS Superfan Club to boost school spirit. They are selling Superfan Kits to students and residents that include the T-shirt, beads and either a cow bell or pom poms for $10 in advance of the first football game to be played at the new stadium on Oct. 10.       (Courtesy photo)

LYNNFIELD — Just in time for the rollout of the multimillion dollar sports fields complex at Lynnfield High School over the Columbus Day weekend, a new club has emerged to celebrate and encourage school spirit.

Dubbed the Superfan Club, the idea for the club originated with two friends, Olivia Skelley and Lexi Yannone, who are both members of the junior class at LHS.

Skelley was originally inspired to create the club after seeing the photos posted online by a friend who lives in Connecticut after her high school’s traditional “whiteout” school spirit event during the opening football game.

Enlisting the support of Yannone, the two girls brainstormed about ways a similar club could help to boost school spirit among their fellow Pioneers.

With financial help from the Lynnfield Athletic Association (LAA), the girls created “LHS Superfan Kits,” which will be sold while supplies last in advance of the first LHS football game to be played in the new stadium on Friday, Oct. 10.

Each LHS Superfan Kit includes a white long-sleeved T-shirt, mardi gras beads and a choice of either pom poms or a cow bell. The kits cost $10 apiece. Skelley and Yannone designed the shirts, selected the items to be sold and promoted the idea at the club fair. Their club concept was well-received during last week’s school club fair, with over 100 students signing up for it.

Fans may buy their Superfan Kits prior to the Oct. 10 game, so they don’t have to wait until Columbus Day weekend to show their school spirit.  Kits will be on sale during school lunches at the high school starting next Wednesday, Oct. 8 through Friday, Oct. 10.

Any extra kits will be sold at the game on Friday, Oct. 10 at the new stadium.