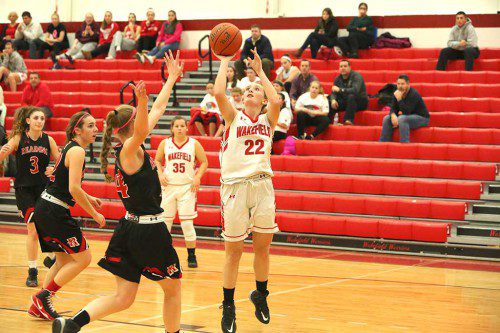 HAILEY LOVELL, a junior (#22), scored 10 points and was one of three Warrior players to do so in their 48-26 rout over Arlington last Thursday night. (Donna Larsson File Photo)

ARLINGTON — The Wakefield Memorial High girls’ basketball team won two close games at home against Lexington and Reading. However against Arlington on the road, the Warriors had a much easier time earning a victory.

Wakefield completely shut down the Spy Ponders as it rolled to a 48-26 triumph last night Thursday night at the Tozlowski Red Gymnasium.

The Warriors are now 3-0 after three Middlesex League crossover games against teams from the Liberty division. They also won their first road contest of the season.

Wakefield’s defense smothered Arlington as the Warriors surrendered seven points in the first quarter, eight in the second period, eight in the third period, and just three in the final quarter.

Meanwhile, the Warriors tallied 13 first quarter points, 11 in the second, 14 in the third, and 10 in the fourth as they cruised.

Hailey Lovell, Allee Purcell, and Hannah Dziadyk, all juniors, led the Wakefield scoring as all three players scored 10 points each. While Lovell’s and Purcell’s points were all two point field goals or free throws, Dziadyk’s 10 points came as the result of two three-pointers and two field goals from inside the arc.

Hannah Butler, a sophomore, tallied eight points with two field goals and by going a perfect 4-for-4 from the free throw line.

Olivia Dziadyk, a junior, recorded six points and both Brianna Smith, a senior, and Jaime Greatorex, a sophomore, each ripped the cords for two points.

“Our offense was well distributed. No one had more than 10 points,” said coach Meghan O’Connell. “We worked hard and were able to execute our offense. We also capitalized from the play of our defense with points in transition.”

While the offensive effort made O’Connell happy, she was extremely pleased with the defense holding Arlington (0-3) to just 26 points.

“Our defense has been very consistent,” said O’Connell. “If we can hold our opponent to 40 points or under, we feel that we have a chance to win. Defensively we try not to give up more than 10 points a quarter and we didn’t in any of the four quarters.”

Wakefield is undefeated headed into two non-league games against Georgetown this week. The Warriors would like to get a pair of wins there and be 5-0 headed into the M.L. Freedom division portion of its schedule.

“We’re 3-0 and we’re excited,” said O’Connell. “We should have two of our players back and we’ll be 11 strong instead of nine strong. It will be nice because they (Emma Butler and Allyson Coggswell) will make us stronger. The team has been working so hard and it is nice to see their hard work rewarded in the win column.

“We’re off to a great start and we’re undefeated,” added O’Connell. “But we still have a lot to work on to get better. We’ll build on this. We’ve gritted out three wins and we’ve shown our mental toughness. We’ll get a little break and then get ready for Georgetown which plays in the Cape Ann League.”