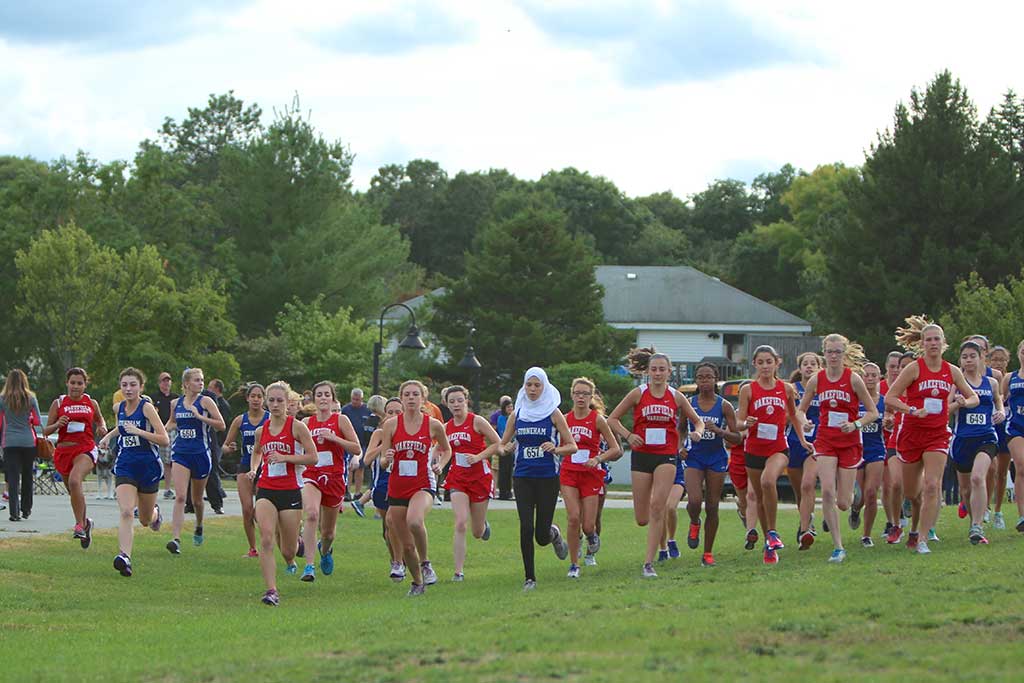 STONEHAM —The Wakefield Memorial High girls’ cross country team may have run on a new course yesterday afternoon, but it got the same old result against Stoneham.

The Warriors took a liking to the Spartans’ new home course at the Colonial Park Elementary School and posted a 16-47 triumph for their first win of the season.

Wakefield is now 1-2 overall but more importantly is 1-0 in the Middlesex League Freedom division as it completed one-fifth of its goal for a sixth straight M.L. Freedom title.

“The course was 2.8 miles. It was a great cross country course with trails and hills. The girls handled it well,” said Coach Karen Barrett.

Jordan Stackhouse, a senior captain went out, took the lead and never looked back. She has been working very hard and it is paying off said Barrett. Stackhouse won the race in a time of 19:43.

“That is very impressive that a freshman is able to run that aggressive,” said Barrett.

Senior captain Abby Harrington was close behind Lucey running a solid race. Harrington finished third overall with a time of 20:45.

Gillian Russell, a junior, was Wakefield’s fourth runner and ran a steady race. Russell captured fourth place in a time of 21:06.

Isabella Kehoe and Yvonne Lucas, both juniors, were neck and neck but were beaten out by Stoneham’s top runner for the fifth spot. They took sixth and seventh with times of 21:31 and 21:33.

Senior captain Maeve Conway finished off the varsity squad with an eighth place finish as she clocked in at 22:02.

“I was very happy with the win. We still need to work on closing the gap between our top five or six runners,” said Barrett. “I would have liked to take the top six spots. I think it was a good learning experience for our team. We will continue to work hard for our next meet.”

Wakefield’s next dual meet is against Wilmington on Wednesday, Oct. 5 at 3:30 p.m. at the Shaun Beasley Course.