Girl harriers have a good showing 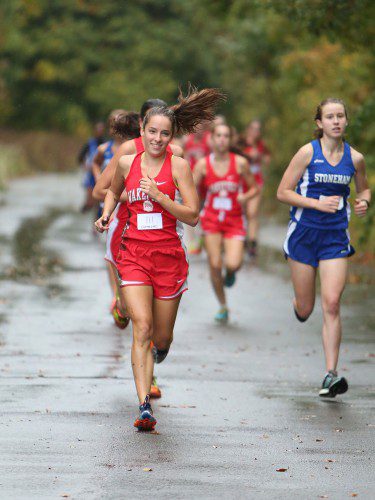 EMILY HAMMOND, a senior, was Wakefield’s top finisher at the Div. 4 Eastern Mass. championship meet on Saturday. Hammond finished 28th overall as she clocked in at 20:25.8 to wrap up her cross country career. (Donna Larsson File Photo)

WRENTHAM — The girls’ cross country team wrapped up a fine 2014 season with a ninth place showing at the Div. 4 Eastern Mass. championship meet this past Saturday at the Wrentham Developmental Center.

The Warriors scored 252 points overall and ran together as a team as several runners finished near each other in the race that had 152 individual runners representing 22 schools.

Senior co-captain Emily Hammond wrapped up her career with a 28th place finish in a time of 20:25.8.

Right behind Hammond was junior Sara Custodio. Custodio came in 29th place as she posted a time of 20:27.8.

The next three Wakefield runners were 73rd, 84th and 87th overall.

Junior Reilly McNamara grabbed 84th overall as she timed in at 22:03.3. Right behind her was freshman Gillian Russell who finished in 87th place at 22:10.5.

Rounding out the Warrior runners was junior Catherine Urbano. Urbano secured 134th place as she posted a time of 24:25.1.

Hammond and Sallade concluded their cross country careers while the rest of the Warrior runners are underclassmen and return next year as Wakefield will seek to defend its four straight Middlesex League Freedom division titles and have a strong showing at the state level.