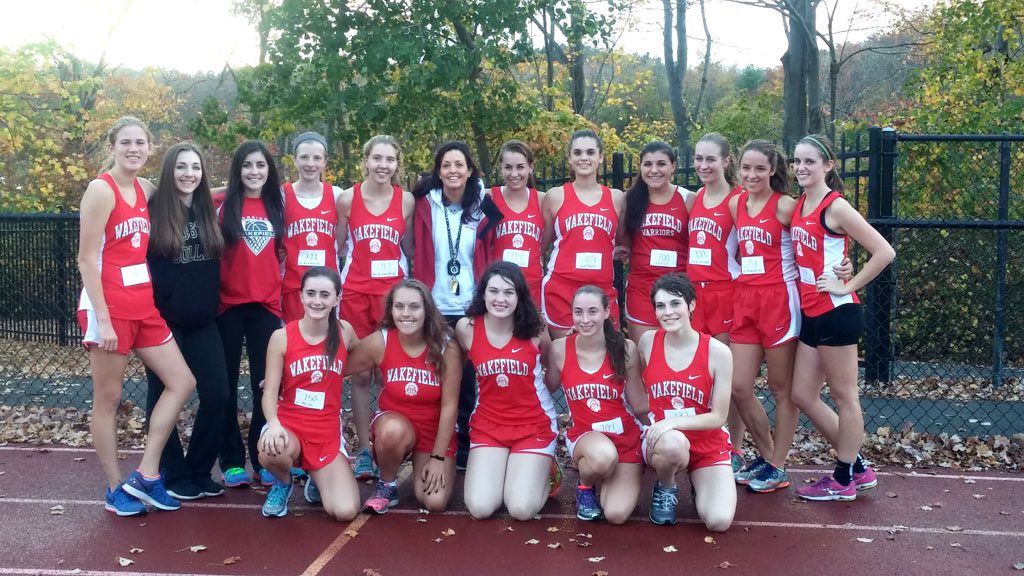 The Wakefield Memorial High girls’ cross country team captured its fourth consecutive Middlesex League Freedom division championship outright but not before it had to fend off a huge challenge from Burlington yesterday afternoon at the Burlington High School course.

The Warriors needed a great effort to deny the spoiler-minded Red Devils as they posted a 25-30 triumph to be crowned the M.L. Freedom division champs all by themselves.

Wakefield wrapped up the dual meet season with a 5-2 overall record and 5-0 record in the M.L. Freedom division.

Burlington, meanwhile, wrapped up the year with a 1-6 overall record and 1-4 mark in the division.

“The girls had the fight of a lifetime to secure the win. Burlington wanted to be a spoiler and they almost did it,” said Coach Karen Barrett. “We started off the season taking one race at a time and for good reason. We worked hard all last week to be ready to compete on Burlington’s course. (The) Burlington girls all ran their personal bests by at least a minute. My team rose to the occasion. They were as gutsy as I have seen them this year. They had to work for every step of that race.”

Senior co-captain Lauren Sallade was second for the team (third overall) running the race of her career. Sallade posted a time of 21:17.

“She has been working so hard and it paid off huge,” said Barrett.

Sara Custodio, a junior, spent most of the race trailing Burlington’s second runner. Custodio really showed Barrett and the team what she was made of when she passed the Red Devil runner in the last half mile and took fourth overall. Custodio ran a time of 21:28 and her performance  was a key factor in winning the meet.

Sophomore Jordan Stackhouse, who has been running so well, had to drop out of the race. This is where Wakefield really needed someone else to step up. Junior Reilly McNamara was that runner. She ran fourth for the team and finished really strong for a seventh overall position. Her time was a 22:12.

Abby Harrington, a sophomore, was Wakefield’s fifth runner. She passed three Burlington girls in the last 400 meters to seal the deal. Harrington came in ninth overall at 22:36.

“I am extremely proud of the effort these girls put in all season,” said Barrett “Our team saying is ‘No Guts, No Glory’. My team showed so much guts and I am so happy we now get the glory.  What a great run. We have four-peated and that is amazing. They simply never quit.”

Wakefield had six more runners that competed in the race.

Wakefield will now get ready for the Middlesex League meet which will be held on Monday afternoon at 2:15 p.m. at the Woburn Country Club.