Girls’ hoop gets back to its winning ways 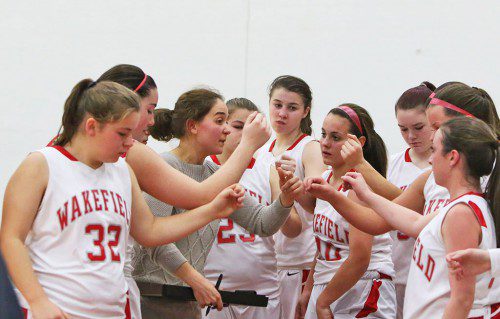 THE WMHS girls’ hoop team had a terrific team effort as it topped Stoneham by 47-37 score for its fourth victory in its past five games. (Donna Larsson File Photo)

STONEHAM — When a child falls off a bicycle while learning how to ride it, he or she typically gets right back up and on the bike again. The Wakefield Memorial High girls’ basketball team had its three-game win streak snapped but came right back and got on the proverbial bike and rode it to a 47-37 victory over Stoneham last night at Stoneham High School.

Wakefield upped its record to 4-2 on the season and 3-2 in the Middlesex League Freedom division with the win as the Watertown loss was a mere bump in the road for the Warriors.

While Wakefield earned the triumph, the Warriors were forced to work for it as it held a lead throughout most of the game. However the Spartans didn’t go away and, despite falling behind by 17 points in the final quarter, made one final run to make things interesting in the final few minutes.

“I’m pleased with the effort,” said Coach Meghan O’Connell. “We had some runs in spurts.”

The first run was sparked by junior forward Gabrielle Joly as she scored six straight points to turn a 5-3 game into a 9-5 Warrior lead. Joly scored eight points for the night and had another key basket down the stretch.

Wakefield never trailed again after that.

The Warriors had a great team effort as junior guard Grace Hurley (five points) hit a shot to beat the buzzer to end the first quarter and had a key three-point shot in the final quarter.

The Warriors also received some nice play from senior forward Daniella Iannuzzi as she netted eight points and had a strong game on the offensive and defensive boards.

“We had a different player step up at different times during our spurts,” said O’Connell. “I thought our defense was good the entire game.”

Senior Jillian Raso (four points) took an inbound pass and scored with 7:07 left in the first quarter to give the Warriors a 2-0 lead. But junior guard Jessica Brown (12 points) hit one of two free throws and senior forward Alley Beane put back a missed shot to give the Spartans a 3-2 lead with 5:01 left in the first.

Iannuzzi sank one of two foul shots to knot up the game at 3-3 before senior forward Olivia Gaughan (10 points) hit an inside shot to give the Spartans a 5-3 advantage with 4:31 left.

Joly finished off a fast break shot, got a steal and a layup and then recorded another layup after a Stoneham possession went awry as the Warriors led 9-5 with 48.7 seconds left in the opening frame.

Beane hit one of two free throws with 13 seconds left. However, Galli recorded a layup with 1.4 seconds left and Hurley scored on a pass from Galli right before the buzzer from underneath the basket after Stoneham turned the ball over on the inbound pass. That resulted in a 13-6 lead for Wakefield after the first quarter.

Sophomore Molly Maloney and Galli traded baskets before Stoneham scored two buckets in a row to cut the lead to 18-14. Sophomore guard Mary Trant stole the ball and got an easy layup and then Gaughan hit an inside shot.

But Wakefield didn’t lose its composure as Galli drove the baseline for a basket and junior guard Mia Joyce put in a rebound of a missed shot. Gaughan hit an outside shot in the final seconds as the Warriors had a 22-16 lead at halftime.

In the third quarter, Boulter heated up from outside and scored 10 of the 13 Warrior points tallied in the frame.

Boulter hit an outside jumper and, after two misses from the foul line by Trant, canned a trey to give Wakefield a 27-16 lead with 5:51 left in the third.

But Boulter answered with her second trey of the game. After a basket by junior guard Alison LoPilato, the Warriors scored the final five points of the period to extend their lead to 10 points, 35-25. Junior forward Emma Butler put in a rebound of a missed shot, Boulter made a layup and Iannuzzi hit one of two free throws.

The Warriors continued their run into the fourth quarter as they scored the first seven points to open up their biggest lead of the game, 42-25. Junior forward Julia Derendal recorded a basket, Hurley sank a three-pointer, and Joly had a steal and a layup to give Wakefield a 17 point lead with 6:10 left in the contest.

However Stoneham wasn’t about to go away as it went on a 10-0 run to cut the lead down to seven points, 42-35. The Warriors went cold from the field and had several turnovers as well which allowed the Spartans to climb back into the game.

Brown and freshman Kaitlyn Driscoll each hit baskets and then Brown sank her second trifecta of the game with 4:04 left. Junior guard Catie Rappa hit three free throws to cut the lead to single digits.

Raso hit one of two free throws with 1:50 left in the contest to end the Stoneham run.

LoPilato sank one of two foul shots with 1:32 left, but Wakefield came up with a pair of clutch baskets from its two captains. Iannuzzi got an inside shot to fall with 1:03 left and Galli had a steal and a layup with 10.2 seconds left to help seal the victory.

Brown hit one of two free throws with 4.3 seconds remaining for the 47-37 final score.

“Give Stoneham credit, they came back,” said O’Connell. “We were able to get the win and getting a win is always good.”

Wakefield will play its fourth straight road game when it faces Wilmington on Friday night at 7 p.m. at the Wilmington Middle School.