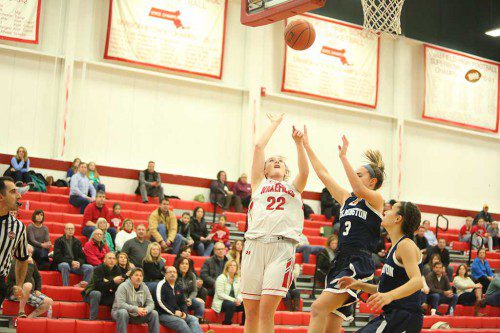 HAILEY LOVELL, a junior (#22), goes up for a loose ball during the Wilmington game. Lovell and the rest of the Warriors fared better last night against Melrose as they won, 53-48. Lovell had 13 points in the winning effort. (Donna Larsson File Photo)

MELROSE — The Wakefield Memorial High girls’ basketball team traveled to Melrose last night and came away with a 53-48 victory over the Red Raiders at the Melrose Veterans Memorial Middle school Gymnasium.

It took a while for either team to score and it was Melrose that got on the scoreboard first with a pair of free throws. Then Wakefield went on a 9-0 run with Hailey Lovell and Olivia Dziadyk accounting for the scoring.

Melrose then began to stage a comeback and a 9-2 run resulted in the two teams tied being tied 11-11 at the end of the first quarter.

The Red Raiders continued their dominance in the second quarter with 10-0 run.

“I think for some reason we panicked and (i’m) not quite sure why, because there was no need to. So, we kind of just got a little disorganized in what we were trying to run and a little frantic,” said Wakefield coach Meg O’Connell.

Wakefield came back at the end of the half with Hannah Butler, Lovell and Allee Purcell accounting for the scoring to send the teams into the intermission with Melrose leading 21-17.

“I think once they settled themselves down, that was a big discussion at halftime. ‘Let’s just calm down (and) let’s run and execute our system’ and we saw a big difference in the second half. I don’t know why that happened and we learned from it and it’s okay. We can’t let ourselves stagnate and get frantic in our offense. We’ve just got to settle and execute,” O’Connell explained.

Wakefield came out strong and was able to regain the lead in the third quarter on a free throw from Purcell but the lead continued to see-saw. Hannah Dziadyk, who had been scoreless in the first half, sandwiched a pair of three-pointers around a coast-to-coast layup by her sister, Olivia Dziadyk, to give Wakefield a 30-23 lead.

Melrose kept clawing back, however, and a steal and layup by Lexi Doherty tied the game at 30-30. The teams continued to match each other and at the end of the third quarter found themselves tied 33-33.

“Melrose is a really good team so we knew it was going to be back-and-forth. We knew we would need all 32 minutes. Yeah, it was great the way we closed the second quarter. I think we went from 10 (points down) to four right at the end. That’s a big difference mentally,” noted O’Connell.

The back-and-forth continued in the fourth quarter and a three-pointer by Doherty gave Melrose a 44-40 lead. The Wakefield went on a 7-0 run to re-take the lead. Cat Torpey scored with 1:14 remaining to close the gap to 49-47. After a free throw by Doherty, Wakefield got clutch free throws from Hannah Dziadyk and Emma Butler to seal the Wakefield victory.

“We started off the second half and scored right away. We took the lead early but Melrose is never going to be down and out. Credit them for coming back and at that point our girls didn’t panic. They just kept pressing and executing our stuff and it was a nice win,” O’Connell said.

Wakefield is now 7-1 on the season and 5-1 in the league with the win.