Girls’ hoop team gets a favorable result against Spartans 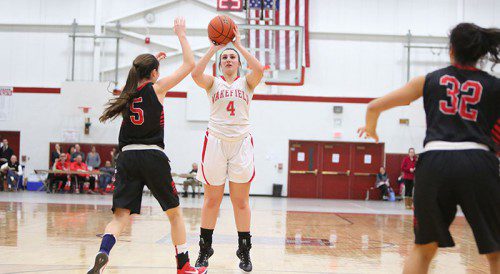 As Head Coach Meghan O’Connell’s team seeks to edge closer to qualifying for the state tournament it found itself in a favorable matchup with the Spartans and were never really in danger of losing the game as the Warriors triumphed in the end by a 46-32 margin.

“Everybody came in and played really hard, we executed our stuff, and it was a good team win,” said Coach O’Connell after the game.

Stoneham may have been a step down from the last team Wakefield faced, undefeated Watertown, but that doesn’t mean the Warriors looked at this game any differently.

“Anybody can beat anybody in this league,” O’Connell said. “We have to come ready to play no matter who it is. Tonight was a tough shooting night but they kept with their defense. I was real pleased with the defensive effort today. It was really great to see them mentally focused and aggressive. We didn’t let any of our offensive woes effect us defensively.”

In the first quarter, Wakefield strode out to a lead early on as senior captain Nicole Galli got the Warriors on the board with an old-fashioned three-point play by taking the ball to the basket on the dribble, making the layup, and taking the contact for the foul where she made the free throw to give the Warriors a lead they would never relinquish.

Senior captain Daniella Iannuzzi had a two of her game high 16 points in the first quarter. Mia Joyce, Gabrielle Joly, and Jillian Raso each had baskets in the first and after one Wakefield led 11-6.

The second got started in a way familiar to WMHS girls’ basketball fans, as senior Amanda Boulter got the scoring started with a three-point bomb. Boulter would have another three in the second, totaling her six point effort on the evening.

Wakefield managed to put up 11 points in the second as well as Iannuzzi had four points and Joyce added one free-throw to go with Boulter’s two threes.

With a halftime lead of 22-16 Wakefield needed a strong second half performance to seek out the victory.

“No matter who you’re facing you try to play to your strength,” O’Connell said of her team’s performance. “I’m always proud of how hard they play, they really do play hard.”

In the third quarter the Warriors’ offense came out a bit cold, and they managed just six points on three field goals. Iannuzzi added a couple more buckets to her tally and Emma Butler connected on a 15-foot shot for her only two points of the game.

With Wakefield finding it hard to score the Spartans had an opportunity to cut into the lead, but they only managed to put up seven points in the quarter and trailed 28-23 after three quarters.

Junior Grace Hurley had an active game for the Warriors coming off the bench. She was in control offensively and defensively, coming up with steals and distributing the ball to her teammates for scores. Hurley also chipped in seven points, all coming in the fourth quarter.

Her efficient input late in the game stifled any hope Stoneham had of coming back in this game as the Warriors took home the victory by a 46-32 final score.

“Grace has been playing awesome, this last handful of games she’s found a nice role for herself,” said the coach after the game.

The win moves the Warriors to 8-5 overall on the season as they aim for the 10-win magic number to stamp their ticket to the state tournament.

Coach O’Connell is remaining focused on the task in front of her team and trying not to focus on the larger scale saying, “We take one game at a time and just prepare for the challenge ahead of us.”

The girls will look to take the next step and move one win away from post season play as they host Wilmington Friday night at Charbonneau Field House at 7 p.m.