Girls’ hoop team goes on the attack against Wilmington 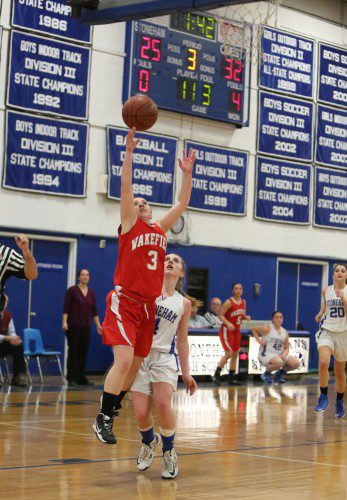 WILMINGTON — The one thing you could say about the players on the Wakefield Memorial High girls’ basketball team on Friday night is that they weren’t afraid to attack the basket.

The Warriors had four players score in double digits and they got to the free throw line 30 times as they posted a 64-55 triumph over Wilmington in a Middlesex League Freedom division contest at the Wilmington Middle School.

With the win, Wakefield increased its overall record to 5-2 and 4-2 in the M.L. Freedom division.

The Warriors held a 10-9 lead after the first period and led 31-25 at halftime. The Wildcats outscored Wakefield, 16-11, in the third quarter as the Warriors led 42-41 after three. It was the final quarter were the Warriors tallied 22 points to Wilmington’s 14 and pulled away for their second straight win and fifth victory in six games.

The game was an intense one according to coach Meghan O’Connell and every time Wakefield got a lead, Wilmington chipped away at it.

Also, senior guard Amanda Boulter sank four of her five three-pointers in the game in the fourth quarter. Boulter finished the game with a game high 20 points.

“Amanda hit four out of five three-pointers in the fourth quarter and we also had excellent foul shooting,” said O’Connell. “Nicole Galli, Gracy Hurley and Gabby Joly all made their foul shots which helped us seal the win.

Wakefield went 25-for-30 from the free throw line for an 83 percent free throw percentage.

In addition to the excellent foul shooting, O’Connell felt Wakefield did a nice job on the boards early, particularly with Iannuzzi.

“Daniella Iannuzzi had a number of rebounds and put backs,” said O’Connell. “We had different players step up at different times. That makes us multi-dimensional and harder to defend. We also attacked the basket by getting to the free throw line 30 times and having four players in double digits.”

Wakefield will seek to continue its winning ways tonight at 7 p.m. when it hosts rival Melrose at the Charbonneau Field House. It will be the first time in five games that the Warriors will be playing on their home court.