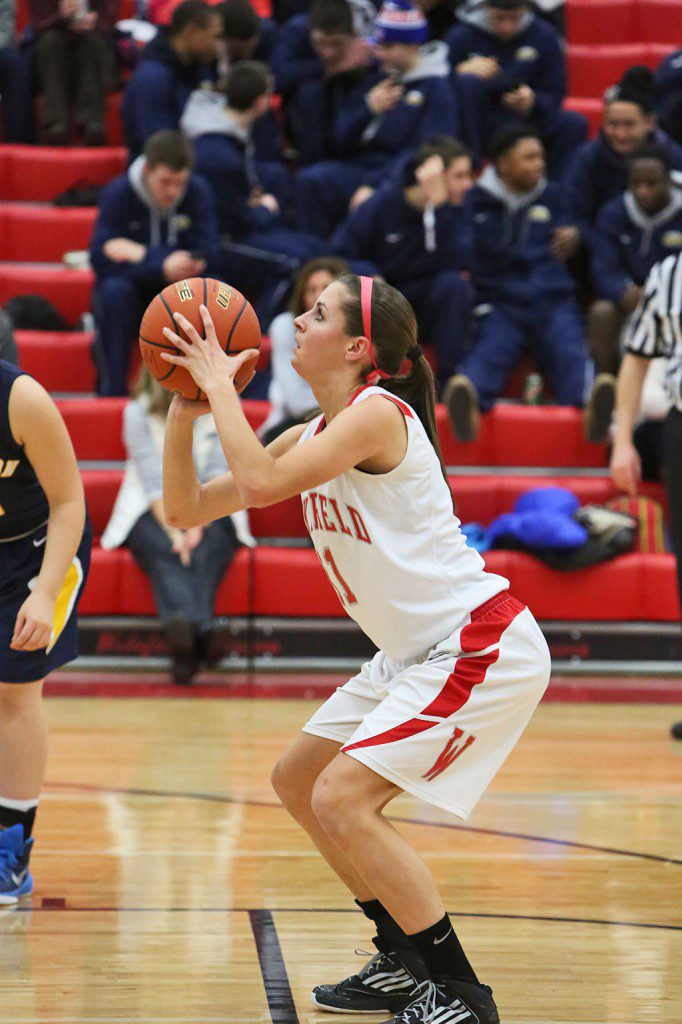 WAKEFIELD — As the excitement of the wild finish from the boys’ game settled, the Warrior girls’ basketball team got underway in its contest against Melrose on Tuesday evening at the Charbonneau Field House.

Head Coach Meghan O’Connell’s team continued to roll along in this Middlesex League Freedom division this season, notching another win as they defeated the Red Raiders, 48-40.

The win means Wakefield has improved its record to 6-2 overall on the year.

“Nothing is easy in the Middlesex League,” O’Connell said after the win. “The girls gritted it out, they toughed it out tonight. I thought our defense was very good all game and I thought the girls did a nice job handling the clock at the end of the game.”

The first quarter was a bit slow offensively on either side, as both teams managed to score just six points. Grace Hurley got things going for the Warriors with a quick move along the baseline to get space to lay it in. Gabby Joly and Jill Raso had the other buckets in the first for the Warriors.

“Offensively we might have been a little bit off but at the end of the day we just stuck with our defense,” O’Connell said. “Defense is all heart, you just got to keep playing, keep boxing out.”

Melrose was able to score 11 points in the next frame, while Wakefield took the lead going into halftime by putting up 13 in the second quarter.

Daniella Iannuzzi had a basket and a free-throw in the second quarter, Raso had five points in the quarter, Mia Joyce scored three from the free throw line and Nicole Galli added a couple of free throws for the Warriors’ scoring.

Amanda Boulter had a layup and a pair of three-point bombs, Iannuzzi and Joyce each had a free throw, Galli had a basket, Joly scored again and Raso had a three-pointer and a free throw for the Warriors’ third quarter scoring.

With the score 38-27 heading into the fourth, things looked good for Coach O’Connell’s team.

Galli got the scoring going in the fourth for Wakefield. Iannuzzi then added another free throw to put the Warriors up 41-27.

Melrose then made its strongest push of the game, as senior Sarah Foote made a layup and freshman Alexis Doherty knocked down a long two pointer.

Iannuzzi scored from the down low in Wakefield’s end but Ashley Harding answered back with a pair of free throws for Melrose.

After Iannuzzi came up short on the front end on the one-and-one for Wakefield, Melrose’s Caroline Nolan scored her only basket of the game.

Wakefield failed to score on its next possession and Foote nailed a three-pointer for Melrose to cut the lead to just five.

With a five point lead, Galli went to the line for Wakefield to shoot one-and-one but couldn’t convert the front end. However Raso was there to grab the rebound and was fouled on the put back, making one of two in her trip to the line.

Catherine Tarpey scored for Melrose to cut the lead down to four points with under three minutes to go, but Melrose was held scoreless from then on.

Down the stretch, Iannuzzi went 4-for-4 from the line, and Raso added another free throw to her tally bringing her point total to 12 for the game and seal the victory for the Warriors.

“They kept working, pushing and grinding which is good to see,” the coach said of her team’s victory. “That’s how you got to play.”

Wakefield’s next game is a trip to Burlington on Friday night for a 7 p.m. against the Red Devils.

“It will be another tough one,” Coach O’Connell said as she looked ahead to Friday night. “It’s (the) Middlesex League, it’s a tough night every night. We just have to get ready to go and be prepared for them.