Warriors wish to execute fundamentals of the game, be competitive this winter 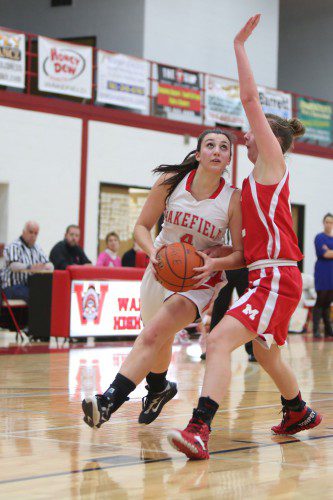 DANIELLA IANNUZZI, a senior forward (#4), returns to the front court and is one the captains for the WMHS girls’ basketball team. The Warriors hope to be competitive this winter after clinching a state tournament berth a year ago. (Donna Larsson File Photo)

WAKEFIELD — With the high school basketball season set to tip off on Tuesday, Dec. 16 at 7 p.m. in Woburn, the Wakefield Memorial High School varsity girls’ basketball team looks to compete again this season in a Middlesex League that is deep with strong teams.

Head Coach Meghan O’Connell returns to the sidelines for the Warriors and she looks to improve on last year’s 12-9 record, a mark which earned them a spot in the state tournament.

“We want to just compete and play hard, we want to be everyone’s toughest game of the year,” O’Connell said recently.

When asked what she would like to see from her squad in the early going, the wish-list for the coach was filled with simple items.

“We want to focus on mostly little things like making sure we have our defense in place, boxing out, rebounding, crashing the boards and trying to jell offensively while running our system. We want to play the best team basketball we can play and winning will be a byproduct of that.”

The Warriors will be led on the floor by forward Daniella Iannuzzi and guard Nicole Galli, seniors who were named captains of this year’s team.

Other seniors returning from last year’s team include Amanda Boulter, MacKenzie Collins and Jillian Raso. Boulter is a guard, Collins is a guard/forward,and Raso is a forward.

Seniors Julia Filippone and Alyssa Rossino are fresh faces on this year’s squad as they try to make an impact for the team on the floor.

Grace Hurley and Gabby Joly will also be back this season. The pair of juniors look to put points up on the scoreboard for Wakefield. Hurley is a guard and Joly is a guard/forward.

Juniors Julia Derendal and Mia Joyce will join the team this season as they try to carve out a space on the roster and help their team win.

Sophomore Emma Butler will also be available for O’Connell should her number be called. The strength of the Middlesex League requires coaches to rely on having a deep roster and some players may be called up from the JVs from time to time. Fringe players can sometimes have big impacts when competition is close and teams are near equal in talent.

Opening Tuesday on the road against last year’s number one team, the Woburn High Tanners, will prove to be a test of their preparation.

“We know that will be a tough game,” O’Connell said.

The home opener is scheduled for 7 p.m. at the Charbonneau Field House on Friday, Dec. 19 against Lexington.

The schedule doesn’t get any easier from there as on Dec. 23 Reading pays a visit to the Charbonneau and on New Year’s Eve the Warriors make a trip to Concord-Carlisle.

After the calendar changes, the Warriors go for a three-game road trip to start the New Year to Watertown, Stoneham and Wilmington before they are then welcomed home by rival Melrose.

It will be important for the Warriors to take it one game at a time as they look to climb the ranks of the Middlesex League. Repeating last year’s postseason appearance will be hard but don’t count the Warriors out. Anything can happen in high school basketball and that’s why they play the games.