Warriors make the most of home court advantage, blast Triton, 55-38 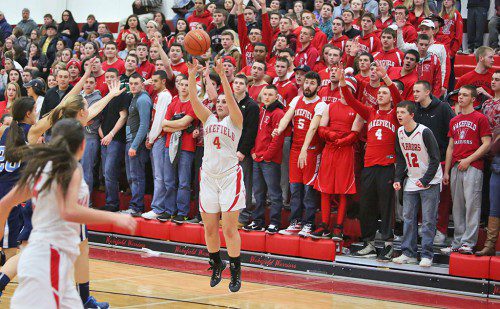 WMHS student Adam Tarpey performed the national anthem before a packed crowd at the Charbonneau Field House before the Warriors went to work and took care of business defending their home court and coming away with the win, 55-38, over the visiting Vikings.

Head coach Meghan O’Connell’s side has advanced to the next step in the tournament as their sizzling shooting and suffocating defense led them to victory over the Vikings. It was Wakefield’s first tournament victory in nearly a decade and it was the Warriors’ first home game in at least that amount of time.

The first quarter started in a familiar way with senior sharp-shooter Amanda Boulter sinking a three-pointer to give the Warriors a 3-0 lead, then after a Triton basket, her second trey put the Warriors up 6-2.

Jillian Raso had four of her 11 points in the first quarter as the Warriors got out to a 13-4 lead.

The Warriors never relinquished their lead as they led wire to wire in the win.

“I think Boulter and Jill started it off knocking down some shots,” O’Connell said. “That got us going and everyone just feeds off that energy.”

Wakefield’s signature defense was on display early in this game. The Warriors held their opponent to just four points in the first quarter on two field goals and just 11 total field goals for the game.

“Defensively they were awesome,” said the coach.

Wakefield kept the momentum rolling into the second quarter with Raso knocking down a three to start things off.

Triton shook off a bad first quarter and its scoring came around in the second as the Vikings notched 18 second quarter points.

“In the second quarter Triton made a run,” Coach O’Connell said. “That is going to happen in the tournament but it’s how you respond and they responded really well.”

Six different players scored for Triton in the second quarter by far the Vikings most effective quarter of the game. 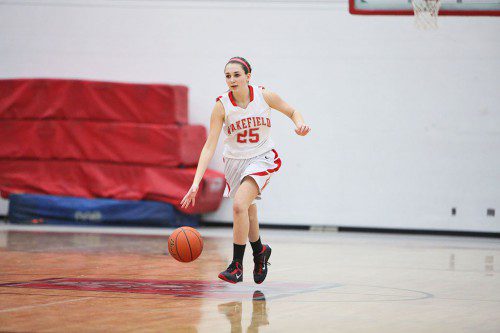 MACKENZIE COLLINS, a senior guard, dribbles the ball up the court during last night’s Div. 2 North first round game at the Charbonneau Field House. Collins scored five points off the bench including a three-point shot as the Warriors rolled to a 55-38 triumph over Triton. (Donna Larsson Photo)

Wakefield didn’t let up in the second as it hung in there with 14 points of its own.

Each team had two three pointers in the quarter. Mackenzie Collins had the other following Raso’s to open the quarter for Wakefield.

In the third quarter Iannuzzi got cooking from long distance. The senior forward had eight points including two three-pointers and 2-of-2 free throws.

The basket continued to shrink for Triton in the fourth quarter. Although the Vikings scored 10 points, all of them came from the free throw line. Wakefield controlled the clock and didn’t force the offense with the lead. They still managed 11 points as five Warriors got on the board in the final quarter.

Raso had four in the fourth while Iannuzzi, Joly and Hurley had two points each and Alyssa Rossino had one point.

The win was hardly ever in doubt as Triton had no answer for the Warrior defense. The Warriors held Triton’s top scorer, Tessa LaFrance to just seven points.

Wakefield will be hoping to continue its run of top defending and hot shooting on Thursday when it takes on another Cape Ann League team. Pentucket Regional High School sports a 21-1 record and will present a strong challenge for the Warriors

“Pentucket is an experienced tournament team,” said O’Connell. “They have a great point guard. We’re going to go out there and leave it all out on the court and have some fun.”