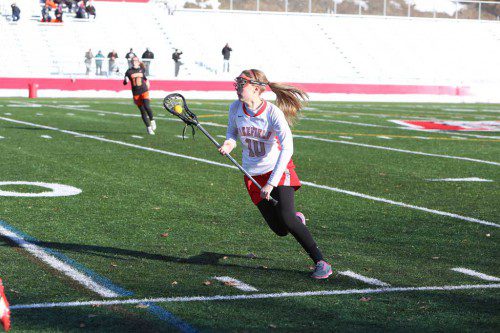 BEDFORD — The Warriors girls’ lacrosse team got off to another slow start yesterday afternoon against Bedford. However, Wakefield was able to overcome the early deficit this time.

The Warriors scored 11 second half goals and held the Buccaneers to one tally as they posted a 16-11 triumph at Bedford High School.

Wakefield is 1-1 on the season.

“It was a great comeback game,” said Coach Cara Luca.

The halftime score was Bedford 10, Wakefield 5. However the second half was a different story for the Warriors.

The game started out with Bedford scoring seven times in a row within 10 minutes of the start of the game.

“In years past this was worrisome because the girls just give up, not this year’s team,” said Luca. “The dynamic makeup of the girls is a good one. They all click with each other and work together.”

Bedford was capitalizing on the draws and every time it won a draw the Buccaneers scored. Sophomore Kelsey Czarnota, Wakefield’s center, was able to figure out a way to tap the ball on the draw and Wakefield’s midfield was able to get control.

“Defensively, we had a good game once we started to double team. We still have a lot to work on and figure (things) out in the defensive end,” said Luca. “Bianca Passacantilli started out in net then I switched in Mikayla White. Mikayla had nine saves which helped defensively.

“Overall all the girls worked hard to overcome the deficit and stuck together,” added Luca. “We have a lot of young players on this team with first year/second year varsity experience. With continued hard work, I feel confident that this year’s team will be successful.”