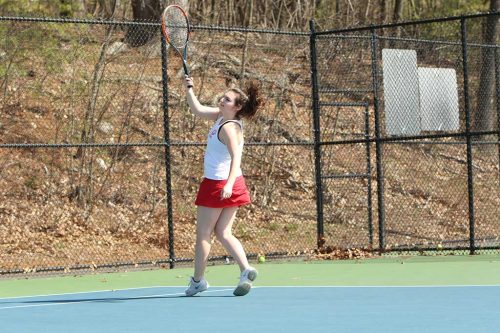 HALEY TANNER defeated Belmont’s Julia Logan, 6-2, 6-2 at first singles on Thursday at the Dobbins Courts. Although Wakefield lost, 3-2, it was the first time in years that the Warriors picked up two matches against a team like Belmont who is in the upper echelon of tennis towns in the Middlesex League’s Liberty Division. (Donna Larsson Photo)

WAKEFIELD — The WMHS girls’ tennis team responded well to a couple of tough breaks brought on by the early-season postponements. Those scheduled changes meant the Warriors would have to play opponents from the large Liberty Division in four of their first seven matches. As most Middlesex large teams are typically very talented, The Warriors would have to bring their best.

That’s exactly what they did last week, as Wakefield traveled to Woburn on Wednesday and hosted Belmont on Thursday.

Against the Tanners, Wakefield put together a complete performance to win 4-1.

Co-Captain Laura McGovern matched that performance with another 6-0, 6-2 win for the Warriors at third singles.

The doubles teams came to Woburn to play, as the first doubles team, Emily Roberts and Kelsey Callanan, cruised to a victory at 6-0, 6-1.

Freshmen Hannah Guay and Erica Pecjo worked hard at second doubles to earn a 7-5, 6-2 win. It was an excellent example of Wakefield stepping up to the challenge as they got their second win of the season.

Another big test came right away on Thursday, as Wakefield hosted Belmont for their third consecutive day of matches. (The Warriors fell to Arlington, 4-1, on Tuesday).

Against, Belmont, a team that is typically difficult to pick up any points against, much less games and matches, the Warriors won two matches and just came up short, 3-2.

“It was the first time in years that we got two off of such a strong tennis town,” said Healey.

Even after two days of challenging matches, nobody could blame the Warriors if they felt a little tired lining up against the Marauders, but Wakefield proved that they can compete with anyone.

The rest of the matches were hardly walks in the park for Belmont as McGovern fought hard in the first set eventually falling 6-4, 6-1.

At second doubles, Guay and Pecjo more than held their own as they were edged, 6-4, 7-5.

Overall, it was proof that the Warriors (2-5) have improved over the last couple of years and now have the type of competitors that will make a return to states a very attainable goal for 2018. Wakefield will play Burlington, Watertown and Reading this week.