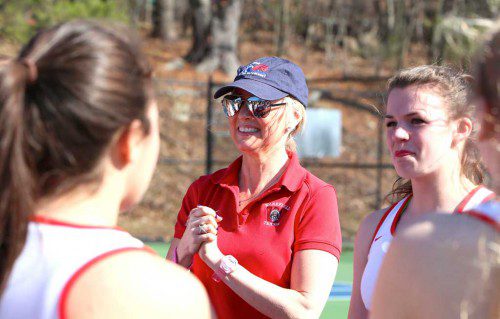 WAKEFIELD — Less than a week has passed since the Wakefield Memorial High girls’ tennis team blanked Wilmington in the first meeting between the two Middlesex League Freedom division rivals. Not much changed in the rematch as the Warriors cruised to a 5-0 triumph yesterday afternoon at the Dobbins Courts to clinch a state tournament berth.

Wakefield increased its record to 8-5 on the season and is in the tournament for the second straight year and for the third time in Head Coach Kathy O’Maley’s nine years at WMHS.

At first singles, senior Meghan Chapman took on Jess Nusbaum and prevailed by a 6-0, 6-0 score.

Grace Hurley, a junior, and Abby Chapman, a sophomore, took on the Wildcat duo of Bridget Cadogan and Christina Wright at first doubles. Hurley and Chapman prevailed by a 6-1, 6-0 score.

Juniors Mollybeth Whitson and Darcy Drago were teamed at second doubles and they took on the Wilmington tandem of Tristan Surpantant and Mary Lesperance. Whitson and Drago posted a 6-0, 6-0 shutout.

Wakefield has three more matches remaining on its schedule and will seek to improve its seeding for the upcoming state tournament. First up is a contest against Melrose this afternoon at 3:30 p.m. at the Dobbins Courts.