Girls’ tennis team is on the brink

Warriors are one win away from a state tournament berth 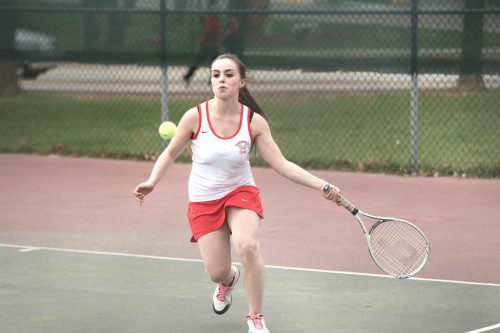 STONEHAM — The Warrior girls’ tennis team returned to play in the Middlesex League Freedom division late last week and is now one victory from clinching a state tournament berth as a result.

Wakefield posted a pair of victories in its past two matches. The Warriors blanked Stoneham by a 5-0 tally yesterday afternoon at Stoneham high after pulling out a 3-2 win over Watertown last Friday afternoon at the Victory Field Courts.

Wakefield is now 7-5 on the season with four matches remaining. The Warriors need one more victory to return to the state tournament for the second straight year.

There was very little drama against the Spartans as the Warriors took care of business and prevailed as they were expected to. Wakefield also won the first match by a 5-0 tally as well.

Sarah Stumpf, a junior, faced Reiko Laski at second singles and pulled out a 6-2, 6-2 triumph.

Abby Murphy, a senior, played at third singles and squared off against Sandra Haddad. Murphy won, 6-1, 6-0.

Juniors Mollybeth Whitson and Darcy Drago were teamed at second doubles and they faced the Spartans tandem of Kaitlyn Patterson and Louisa Melchionna. Whitson and Drago pulled out a hard fought 6-1, 6-4 victory.

The Warriors had a tough contest against Watertown, a team it defeated by a 5-0 score in the first meeting. But Wakefield did get victories at first singles, first doubles and second doubles to earn the win.

At first doubles, Hurley and Abby Chapman pulled out a 6-1, 6-4 triumph over the Red Raider tandem of Jody Asksryan and Sedran Keterji.

Whitson and Drago had a three-set match against the Watertown duo of Jessica Russo and Rebecca Hellman at second doubles. The Warriors lost the first set, 2-6, but came back and took the final two sets, 6-2, 6-1.

Meghan Chapman got the third point at first singles as she played against Michelle Aflandiran. Chapman won the first set, 6-2 and won the second set in a 12-10 tiebreaker.

Wakefield returns home to face Wilmington tomorrow afternoon at 3:30 p.m. at the Dobbins Courts. A win will give the Warriors a postseason berth.