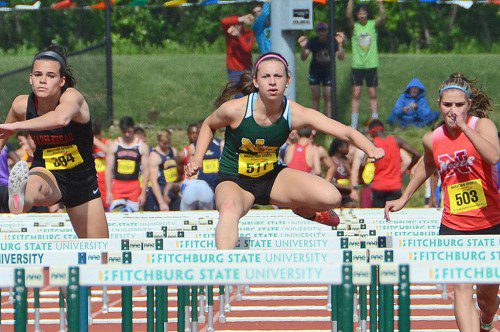 NORWELL — After two postponements due to weather, the girls’ track and field team finally had the opportunity to compete on Wednesday, June 3 at the Division 4 State Championship at Norwell High School.

As the defending state champions, the North Reading team was definitely amongst the favored to win the meet but would face stiff competition from Norton High School, which beat them a few weeks back at the State Relay Championship. 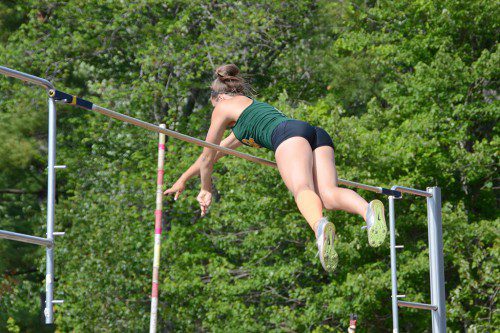 “The pentathlon is a taxing event, as it requires an athlete to have pure sprint speed and technique to handle the hurdles and jumping events, but also the power to put the shot and endurance to run 800 meters after hours of competition,” explained head coach Sotirios Pintzopoulos.

Jenna Raffael did not let the difficulty of the event hold her back as she came into the event seeded in second place, well behind the first-place favorite from Norwell who had won the event the previous year.

Raffael did not settle as she stepped it up in all five events to win the pentathlon championship with a total of 2,372 points while earning 10 points for the team and beating out both second-place finisher Brooke Santos (2,285) from Old Rochester Regional and last year’s winner, Sarah Debendicitis from Norwell (2,274).

Raffael’s teammate, Olivia DeMonico, was not far behind in fourth place with 2,219 points which added another five points to the team score. “Jenna’s victory makes her the first athlete in the school to win the title as this was only the second year the event was contested at the state meet,” her coach added.

Adding to the 15 points from the pentathlon were another 18 points in the pole vault as Julia Valenti and Rachel Hill went 1-2.

Hill hit a new personal best of 10-feet for second place at the meet, making her the top freshman pole vaulter in New England.

“The only one who vaulted better than Hill that day was her own teammate, Julia Valenti, who vaulted 12’ 7.5”, hitting a new personal best, which not only bettered her own school record but also the meet record, which had held up since 2002. This marked Julia’s third consecutive divisional state title in the event,” Pintzopoulos said.

Valenti also competed in the 100-meter hurdles and was seeded second coming out of the preliminary round but struggled to run a clean race in the finals. She had to settle for fifth place and four team points.

“This brought the team total to 55 points and a commanding lead that lasted for most of the meet, but the Hornets could not keep pace with the team from Norton that continually clawed away at the score, closing the gap and eventually taking the lead,” Pintzopoulos said.

Meredith Griffin was the only other individual to score for the team as she took fifth place in the mile with a new personal best time of 5:22.12 (fourth best in school history).

Leading into the final two events of the competition (4×100 and 4×400 meter relays) the team scores were as follows: Norton 66, North Reading 59, and Weston 53. With all teams within 20 points of each other it was still anyone’s meet to win as a first place finish in both events could earn a team a total of 20 points.

However, each school had a team in both relays that were expected to score in the top six. Unfortunately, the Lady Hornets, who were leading at the third and final exchange of the 4×100 meter relay, dropped the baton and did not score a point. They had to watch as Weston and Norton went 1-2, bringing their team scores to Norton 74, Weston 63 and North Reading 59 as the Hornets fell out of first place contention.

The only way the team would get second would be if they outscored Weston by five points in the relay, Pintzopoulos said. The Hornet 4×400 meter relay team of Kerri-Ann Donovan, Julia McDonald, Meredith Griffin and Kirsten Bradley ran a stellar 4:15.99 for fifth place, but was beat out by both Weston (2nd) and Norton (3rd).

“Despite the disappointing finish, the team had three individual state champions in Jenna Raffael, Julia Valenti, and Cole Godzinski, all of whom qualified (along with Rachel Hill) to compete at the All-State Championship just three days later at Fitchburg State University,” Pintzopoulos said.