Warriors rise to the occasion against Burlington in dual meet finale 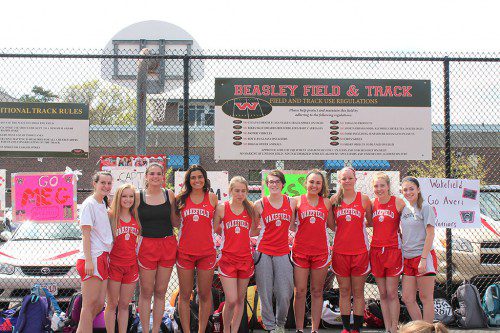 THE WARRIOR seniors on the girls’ track team helped Wakefield capture the Middlesex League Freedom division crown, its first since 2012, in their final meet at the Beasley Track and Field facility.

The Warriors also were determined not to lose to 2014 and ‘15 M.L. champion Burlington once again.

Wakefield was not to be denied as it posted a convincing 91-45 victory over the Red Devils on Friday afternoon in the dual meet finale at the Beasley Track and Field facility.

The Warriors finished atop the M.L. Freedom standings with a 5-0 record and captured their first league championship since the 2012 season.

Burlington, meanwhile, finished the season with a 2-3 record.

“It’s a fabulous win. We showed up and we were ready,” said Coach Karen Barrett. “Everybody on my team came prepared and gave it 100 percent. We gutted it out and had some huge performances. They really wanted to win.”

The Warriors dominated throughout the entire meet and swept three events while going one-two in many others. As a result, the meet was never close and Wakefield rolled.

“We thought we could win but we did not expect win this big,” said Barrett. “The kids were hungry and wanted to get it outright. We didn’t want to share with Melrose. We had some amazing performances for the biggest meet of the year. The amount of fans that were at the meet was fantastic. The Beasley Oval was filled with energy and excitement.”

Since the meet was a double dual with the boys’ teams (the WMHS boys’ track team came up short in its league title bid to the Red Devils by a 78-58 score) the running events and field events were occurring at the same time.

The Warriors secured first and third in the 400 hurdles. Juniors Abby Harrington and Marissa Hoffman clocked in at 69.1 seconds and 75.2 seconds. Avyanna Monroe was second for Burlington at 74.2 seconds.

Amanda Westlake, a freshman, won the mile as she posted a time of 5:49. Morgan Powers and Samantha Hobgood were second third with identical times of 5:56.

Senior captain Julia Derendal captured first places in the discus (93-7) and javelin (111-1). It was her best throw ever in the javelin. She also came up huge under pressure in the discus. Going into her last throw, Burlington had the lead with a distance of 86-3. Derendal rose to the occasion with her winning distance.

“I have never had a thrower go undefeated in two throwing events,” said Barrett. “I am so proud of the fierce competitor she had been this season.”

Wakefield swept the javelin with Alex Rollins, a junior, and Rylee Parent, a sophomore, finishing second and third with throws of 92-6 and 76-3.

Allee Purcell, a sophomore, earned a second place finish in the high jump as she cleared 4-8. Anne Morrison and Alexis Collins secured six points for Burlington in the event with jumps of 5-3 and 4-6.

Harrington recorded her second victory with a leap of 15-4 in the long jump. Rylee Glennon took second for Burlington with a distance of 14-8, while senior Kaylin Stewart was third for Wakefield with a jump of 14-7.

In the triple jump, senior captain Sam Ross continues to shine as she won the event with a leap of 35-9.

On the track, the points kept piling up for Wakefield.

Sarah Buckley, a senior captain, and Avery Parece, a senior, came in one-two in the 100 hurdles with times of 16.8 seconds and 17.1 seconds. Nina Nguyen was third for Burlington at 17.5 seconds. Parece’s time was a state qualifying time.

Ross posted another first place as she won the 100 meter dash with a personal best time of 12.9 seconds. Sophomore Ana Lucas was second as she clocked in at 13.2 seconds. Burlington’s Sheila Joyce was third at 13.4 seconds. Lucas also ran a personal best time, qualifying for states.

The Warriors then swept the 400 meter run, which combined with all the field events, gave them 70 points to clinch the victory.

“Junior Abby Harrington finished her season going undefeated in the 400 hurdles, breaking the school record,” said Barrett. “She also won the long jump. Harrington took third in the open 400 with a fantastic finish just beating out Burlington at the line. She brought everything she had to the meet. I am really proud of her performance.

“Purcell had a great meet getting second in the high jump and 200 and first in the 400,” added Barrett.

In the 800 meter run, Cassie Lucci, a junior, and Kaia Carioli, a sophomore, finished second and third for Wakefield with times of 2:34 and 2:37. Julia Hovasse won the event for Burlington with a time of 2:31.3.

Ross won her third event of the meet as she clocked in at 27.5 seconds in the 200 meter dash. Purcell took second at 27.7 seconds and Burlington’s Mikenna Mattson ran a time of 28.2 seconds.

Wakefield swept the two mile for its final points of the meet. Jordan Stackhouse, a junior, ran a PR time of 12:28.9. Senior Meaghan Hudson and freshman Isabella Kehoe came in second and third at 13:18 and 14:21.

“This is more satisfying since we lost the title to Burlington two years in a row,” said Barrett. “This makes it all the better. I’m so proud of my team. I couldn’t be happier with the way they performed. They certainly earned the title outright.”

Wakefield will now prepare for the Div. 3 state meet which will be held on Saturday at 9:30 a.m. at Burlington High School.