Warriors will play in North Sectional showcase on Monday 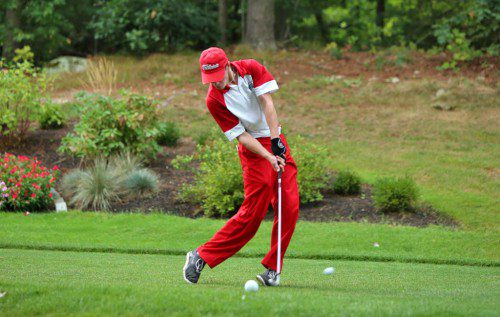 DAVID MELANSON, a sophomore, is one of six Warrior golfers who will be competing in the Div. 2 North sectional golf tournament on Monday at the Far Corner Golf Course. (Donna Larsson File)

WEST BOXFORD — The Wakefield Memorial High golf team, having its best season since in decades, would like to keep the ball rolling as it prepares to play in the Div. 2 North Sectional on Monday morning at 9 a.m. at the Far Corner Golf Course.

The Warriors finished the regular season at 12-5-1 overall and were 8-3-0 in the Middlesex League Freedom division. Wakefield won a share of the M.L. Freedom division championship along with Burlington.

It is also the second year in a row that the Warriors have clinched a berth in the North sectional tournament. Last year, Wakefield got into the state tournament with an 8-9 record as it finished in a two-way tie for second place.

This season has also been Wakefield’s best since the team posted an 8-3 record in 1988 under then coach Dave Tropeano.

Should the Warriors qualify to compete in the Div. 2 state tournament, then they will be playing on Monday, Oct. 27 at 9:30 a.m. at the Glen Ellen Country Club in Millis.